Hot jazz, cool blues and a whole lot more comes back to town.

This July, once again jazz and blues musicians and fans from throughout the country, and from further afield, will make their way to Birmingham, Jazz City UK.

The 35th Birmingham, Sandwell & Westside Jazz Festival will present 225 performances in 111 venues in the ten days from July 19th to 28th. That’s an average of more than 40 hours of live music every day – and almost all of it is free admission.

Cafes, bars, shopping centres, street corners, libraries, museums, restaurants and hotels as well as a canal boat, and a doctor’s surgery will be packed with jumping, jiving jazz and blues fans enjoying the best free jazz and blues party in Europe.

There will be musicians from the UK, Spain, Italy, Lithuania and France, delivering a heady mixture of Dixieland Jazz, blues, swing, bebop, big band, and gypsy jazz. The swing and gypsy music craze currently sweeping Paris will be well-represented in the festival with four jazz attractions from the City of Lights: Les Zauto Stompers de Paris, Leila Duclos et Didier Conchon, Florence Joelle, and The Dirty Ragtimers. 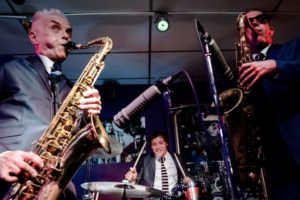 The Potato Head Jazz Band from Granada in Spain are guaranteed show stoppers and are set to play 15 shows across the region, more than any band in the history of the festival! Their romping Dixieland jazz, straight out of 1940s Chicago makes them the odds-on favourite for Band of the Festival.

The foreign contingent is completed by The Schwings from Vilnius, Lithuania, and The Jim Dandies who live in Bassano Del Grappa in Northern Italy.

The cream of British jazz soloists will include the Scottish trumpet ace Bruce Adams who was once famously sacked from the Freddie Starr band for upstaging the boss; the Tubby Hayes acolyte Simon Spillett; Louis Armstrong prodigy Enrico Tomasso; the legendary veteran pianist Brian Dee who in his youth recorded with Bing Crosby and Johnny Mercer; and Len Skeat who Peggy Lee said was her very favourite double bassist.

The festival is essentially a good time affair, not just for jazz fans but for anyone who enjoys good company and great music – and it’s not strictly music. There are six free Jitterbug: Just What The Doctor Ordered sessions – free dance lessons for beginners and intermediates of all ages: You’re Never Alone with a Uke where youngsters of all ages are encouraged to spend an hour learning the basics of playing a ukulele before giving a show performance.

The Festival also features a photography workshop, setting and assessing assignments and presenting the best work in the Photography Shoot Out. Then there’s the Sketch Crawl. That’s just like a pub crawl, but without the beer. Well, not always without the beer.

Information is available and updated at www.birminghamjazzfestival.com or by phone on 0121 454 7020.