A working mum from Birmingham says her “flexible and supportive” boss has helped turn her home life around.

To mark Carers Week 2019, which kicked off on June 10th, Jo Whiting (pictured) is speaking out about balancing working with caring for her son, Levi to help launch a brand new awards scheme for Birmingham businesses.

Jo, who lives in Quinton, was recently faced with leaving her job in favour of home-educating seven-year-old Levi, who has sensory processing issues and was deeply unhappy in mainstream school. 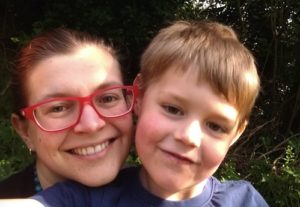 She said: “Levi didn’t settle well at school and he used to sob uncontrollably in the morning as he was so unhappy at the prospect of having to go in. We tried everything to make it easier, but the mornings became unbearable.

“He became increasingly distressed and we’d be forced to leave him sobbing and hysterical. Something had to give, so we decided to home school him.”

In order to do this, Jo was prepared to resign as a Community Development Worker at St Gabriel’s Community Centre in Weoley Castle.

She said: “Quitting my job was the only way I could see home schooling work for Levi and I was gutted about leaving. But when I spoke to my boss she couldn’t have been more supportive. She made it very clear she didn’t want me to go and they’ve adjusted my working pattern and made small changes which means I can fulfil my working obligations.”

Jo is just one of thousands of carers who work across Birmingham.

Employers everywhere are supporting their workforce in their caring roles which is why the Birmingham Carer Friendly Business Awards have just been launched as part of the Working for Carers programme.

Developed to recognise outstanding service that has made an impact and difference to someone in their caring role or for employers who demonstrate an understanding of the needs of a carer, nominations have just opened.

Jo said: “I will definitely be nominating my workplace. My colleagues and boss have been amazingly supportive. They have listened, mopped up the tears and helped me put my work face on so I can get on with what I’m paid to do.

“Having a supportive team behind me has prevented me from going sick with stress. There’s an amazing culture of understanding, which has helped get me through the tougher times. Thankfully Levi is more settled and we have several things in place at home so he can continue his learning in an environment he feels happy in.

“I think the Birmingham Carer Friendly Business Awards are a brilliant idea, as I think it’s important to appreciate the employers and companies that recognise those who are in a caring role.”

Forward Carers was launched to make a real difference to the lives of people caring for older frail people, sick or disabled friends and family members. The organisation also launched the Working for Carers programme, which encourages companies to support staff who may also be in a caring role.

Simon Fenton, the CEO of the organisation said: “We’ve launched the Birmingham’s Carer Friendly Business Awards as we want to promote the importance of supporting carers in the workplace and to engage with businesses across the city.

“The awards are for businesses across Birmingham which have contributed to supporting carers in their community and/or workplace. We are looking for organisations and individuals who are carer friendly and regularly go above and beyond in their support for carers.”

Nominations for the awards will run until August 5th, with the winners announced in September. To submit a nomination, click here