Funding announced to encourage more people to cycle to their local railway station.

Over £740,000 is being spent on improving cycle facilities at London Northwestern Railway and West Midlands Railway stations across the network.

The Department for Transport has awarded the train operators £371,000 of funding through their Cycle Rail programme, representing around 6% of the total awarded nationally. This is being match funded to help deliver an extensive programme of improvements worth £742,000.

London Northwestern Railway and West Midlands Railway will be spending the investment on encouraging people to consider how they can reduce their carbon footprint and to promote healthier, more sustainable travel choices such as cycling, when travelling by train. It is hoped that by improving the facilities available at stations, cycling can be made an easier and more convenient alternative for commuters and leisure travellers alike.

Initiatives being planned include:

– Providing around 250 additional cycle parking spaces across the network;
– Improving the facilities at 300 spaces to encourage people to use these areas;
– Increasing cycle parking capacity at busy commuter stations and at stations where a high percentage of those driving to the station live nearby, and might benefit from switching to cycling as part of their journey;
– Supporting local communities on less busy lines, where connectivity to public transport is of key importance
– The investment will also go towards supporting the Stations as Places station travel planning programme. This is a scheme which aims to assess in detail how people travel to and from ninety different London Northwestern Railway and West Midlands Railway stations. This information will be used produce a detailed plan on what can be 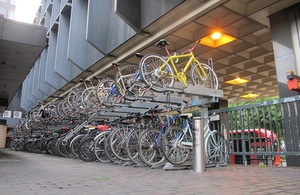 done to help make access to the railway even easier for passengers. The train operators are in the process of conducting surveys at key locations across the rail network as part of this ongoing work.

Jon Harris, integrated transport and accessibility manager for London Northwestern Railway and West Midlands Railway, said: “The Cycle Rail funding awarded to us will play a key part in helping our passengers make more sustainable travel choices when travelling to and from our stations. Rail travel is continuing to grow in popularity, with major improvements on the way over the coming years. We will be introducing news trains, more capacity and will have improvement projects taking place at many of our 149 stations. It is vital that we bring cycle facilities into this planning and make the railway as accessible as possible for everyone.

“Passengers may see our teams out and about at stations and on trains over the coming months, asking for feedback on their experience of using rail travel as part of their journey. We would encourage anyone with any ideas and feedback to get involved and let us know your views and what they would want to see.”

Cycling Minister, Michael Ellis, added: “Cycling to your nearest station and catching a train to work is a great way to keep healthy, and help make our towns and cities vibrant places to live. But to make this a reality, I know that the right infrastructure needs to be in place. This latest investment will see many more stations become accessible for cyclists, so that greener travel options – whether as part of a longer or shorter journey – become the norm.”

The Cycle Rail programme has been in place since 2009, and provides funding to improve cycle facilities at railway stations. On top of the £6.8 million announced in June, the Government has already given over £33 million to railway stations across England to increase the number of sustainable journeys and make cycling a more viable form of transport.

For more information on the DfT’s Cycle Rail scheme, visit the gov.uk website.