Live event set to attract thousands of fans to Birmingham.

The canal bridge over Broad Street will be renamed as the Black Sabbath Bridge at 3pm on Wednesday 26th June at the celebrations organised by Westside Business Improvement District. 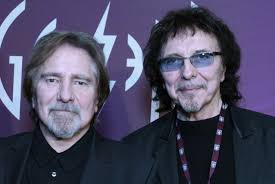 Meanwhile, the heavy metal bench dedicated to the band which is to be located on the bridge will be unveiled to the general public at the same time.

Sabbra Cadabra, the renowned Black Sabbath tribute band, will be transported along with their instruments and sound equipment onto a tiny island on the canal located between The Malt House pub, the Sea Life Centre and the Arena Birmingham.

The band will start playing from 2.30pm on 26th June to warm up gathering crowds while Black Sabbath founding members Tony Iommi and Geezer Butler hold a press conference at a nearby venue.

At 3pm, two canal barges will then take the legendary rock stars across to the island where they will be interviewed by former sports star and current TV broadcaster Christian Martin.

Martin, a lifelong Black Sabbath fan, once played rugby for Argentina and UK teams like the Saracens and Pontypridd. He is now a star TV presenter who commands an audience of millions across South America.

Sabbra Cadabra will continue to pump out top hits while Iommi and Butler cruise on to unveil the new Black Sabbath Bridge name and the heavy metal bench, cheered on by thousands of fans gathered at canalside bars and footpaths.

The band will continue playing to the crowds celebrating the new Black Sabbath venue until around 4.30pm and are scheduled to play again that evening at The Brasshouse and O’Neill’s bars on Broad Street.

Christian Martin, who still avidly follows Black Sabbath, said: “It will be an honour to play a little part in this event and to bring it to our people on the far side of the world.”

Mike Olley, general manager of Westside BID, added: “The afternoon of Wednesday 26 June will see an extraordinary event here in Birmingham in honour of the city’s legendary heavy metal rockers.

“We’re grateful to the Canal & River Trust, Birmingham City Council, Sabbra Cadabra and our many other partners for helping us to realise our ambition to pay this special tribute to Black Sabbath.”

Ani Sutton, community engagement manager at the Canal & River Trust, said: “We’re thrilled to be involved in helping people enjoy this event on the canal in Birmingham – which is celebrating its 250th birthday this year.

“Dozens of our volunteers will be on duty throughout the day to make sure that everyone has a great time but also that they keep safe.”

The whole event coincides with a major Home of Metal exhibition celebrating Black Sabbath and the band’s legacy, running from 26th June to 29th September at the Birmingham Museum and Art Gallery.

This has created a captive audience for the Black Sabbath Bridge unveiling, adding to rock fans would have anyway gathered in Birmingham just to catch a glimpse of Iommi and Butler.

Jim Simpson, managing director of Big Bear Music which has arranged Sabbra Cadabra’s performance, commented: “This fabulous event could easily see thousands of fans lining the canalside in the heart of Birmingham’s entertainment district. We and the band can’t wait to play our part!”

Tony Iommi said: “We’re thrilled that everyone can now enjoy what has become a special location for Black Sabbath history.”

Geezer Butler added: “I can’t wait for what’s going to be such a memorable event.”