BBC Gardeners’ World Live has announced the winners of its prestigious Show Garden awards at the NEC, with a garden themed around the history of the Jewellery Quarter winning the highest award possible.

Designer Alexandra Froggatt received the Platinum Award for her creation, The Watchmaker’s Garden. The garden pays homage to Birmingham by recreating a garden typical of a historic Jewellery Quarter craftsman’s back yard from the 19th century. The build was also named as Best Show Garden. 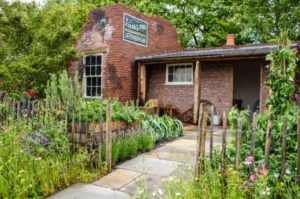 The garden features heritage vegetables in a kitchen garden traditional of the era, as well as cottage garden flowers, naturalistic grasses and rustic paths and fences. The interactive watchmaker’s workshop includes artefacts sourced from working jewellers in the district, and even from the city’s iconic St Paul’s Church, with the help of the JQ BID. Also featured in the build is a replica of the area’s famous Chamberlain clock face.

Alexandra Froggatt, winner of Best Show Garden, said: “There’s nothing more rewarding than seeing all your hard work and hours being recognised in such a way. I’m thrilled at how the Show Garden has turned out, as it was an ambitious design. But with the help of my team, my family, and the Jewellery Quarter BID, which has supplied the artefacts, we’ve created something really special and I can’t wait to see the visitors exploring and enjoying it.”

Bob Sweet, Horticulture Director at BBC Gardeners’ World Live, said: “The conditions which Alexandra and her fellow garden designers and landscapers have had to work in this week have really tested their skills. Alex’s finished garden is perfect, an example of a Show Garden at its very best and is an absolute must-see at the Show this week”