From 27th June until 6th July BE Festival turns Birmingham Repertory Theatre on its head, transforming the rarely seen backstage areas into a lively festival hub, filled with artists from all over Europe, and beyond, enjoying performances, food, workshops, talks, and delicious Raspberry Mojitos.

Birmingham and the wider world has changed exponentially since 2010. This year, the festival programme reflects on the past, and how to move forward, contribute and challenge the status quo society is building for the future. 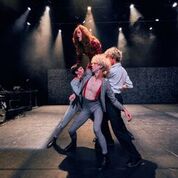 To kick the celebrations off in style the festival in collaboration with Birmingham Repertory Theatre presents the UK premiere of Deadtown by the Forman Brothers Theatre from 27th-29th June. Created by the sons of Oscar-winning Director of One Flew Over The Cuckoo’s Nest Miloš Forman, this spectacular theatre piece brings together a cast of twenty acrobats, dancers, singers and musicians to perform an incredible Wild West tale.

The main programme takes place from 2nd-6th July; highlights include Brussels-based Moroccan choreographer Radouan Mriziga performing using his body as a tool to discover and draw hidden perspectives in his mesmerising solo 55. German choreographer Paula Rosolen returns to BE Festival with her show PUNK‽; a lively and energetic homage to punk and contemporary dance, complete with a live band and pogo sticks. In Silence, Catalan company Ça Marche explore a world of improvised chaos, with a cast of local children, fake snow and giant blow up monsters, that exists when parents aren’t watching.

Other highlights include the award-winning Sotterraneo and their full-length show Dies Irae: Five episodes around the end of the species (Italy). Tongue in cheek, uncanny and provocative this show explores how humans archive our ‘collective’ memory of our past, present and hypothetical future. In their show One Shot, Belgian duo Maxime Dautremont & Foucauld Falguerolles demonstrate amazing feats of acrobatics, axe throwing and Chinese pole technique, all set to a live rhythm and blues score.

BE Festival alumni and creators of the critically acclaimed shows Palmyra and Eurohouse Bertrand Lesca and Nasi Voutsas, return to perform The End (UK). Inspired by contemporary issues, it is a dance for the end of their relationship and the end of the world, but most importantly a celebration of our own mortality and of everything around us.

As in previous years, there is a free programme of live music and DJs to keep festival goers grooving into the early hours. From award-winning DJ and local legend Glyn Philips with his GlobalSoundClash, Brummie electric-pop trio Lycio and the funk, fiddle and jazz fusion sounds of Gathering Tides.