Our hard-working team brings you the best from Farm Shop & Deli 2019.

One of our highlights of the year is the early Spring gathering of the food industry under the umbrella of the Farm Shop & Deli and associated shows that take place at the NEC. Not only is is a chance to witness upcoming trends in food (and increasingly food marketing) but there’s also a handy opportunity to sample what it is that we’ll be spending our money on over the coming months.

Seminars for 2019 reflected the concerns and aims of the food and drink industry – cutting down on the use of plastics and non-recyclable packaging dominated the agenda but there was also room for concern about ethical manufacturing and of course, the word that hung over the show as it does most industries at the moment – Brexit. Several sessions were devoted to finding and analysing the next big thing in the retail world, but you’ll forgive us for giving a wide berth to ‘Insects as Ingredients – fad or future food?’

Talking of which, a particular highlight of these shows is to guess which of the new fads will be around next year and reflect on which old favourites seem to be on the way out.

Definitely getting bigger by the year, if not the minute, is the vaping craze which was so extensively displayed that it almost had its own show in a corner of the hall. Heavily linked to this mini-industry and definitely one for the future is CBD (Cannabidiol oil), a cannabis derivative new to the UK but making inroads in many areas from vaping to tea drinking. Expect to see its claimed side-effects coming to a tabloid near you, soon. 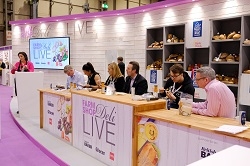 Of the more mainstream products, the trend for healthy snacking seen particularly in the Forecourt Show continues to grow. Nakd remain arguably the best-known and most widely available of their kind although Nairn’s move into producing oat bars has proved a taste success. We’d also be failing in our duty not to report on the excellence of the Meridian range of nut bars.

Recent concerns over allergens has led to a heightened awareness amongst manufacturers over any problems their products may cause and it was good to see that virtually everyone we spoke to was able to either reassure or warn with regards to the ingredients contained in their products.

One trend we have noticed in recent shows has been the gradual scaling-down of the bigger companies’ presence – gone are the days when Gregg’s would be handing out industrial quantities of their ubiquitous savouries to queues of visitors who really should have been sampling artisan cheeses or cold-pressed Tuscan olive oil, but one sausage roll won’t hurt… In their stead are independent purveyors doing their damndest to preserve standards and a shred of originality is a world where the quality of an advertising campaign can often seem more relevant than that of the product being sold.

It was good to see our old favourite Traybakes continuing to maintain the high standards of their eponymous product, although a taste-off between them and Cakebrands would have to go to several replays and a lengthy sudden-death penalty shoot-out.

There seemed as many cheeses as ever (the Isle of Kintyre Applesmoke Cheddar from Scotcheese standing out amongst an esoteric variety of tastes) and if such a thing is possible, even more chocolate – Willie’s Cacao a particular favourite amongst strong competition.

One sector surprisingly conspicuous by its absence was butchery; save for a sole Northern Irish farmer there was nothing that we could see in the sausages or bacon line and in a similar vein there was also an all-time low amount of seafood produce. Ice cream was also less visible than it has been, particularly surprising in view of last year’s record-breaking summer.

Despite European uncertainty there was still strong representation from the Continent, Casalinga’s range of peppers, olives and pesto in particular bringing the flavours of the Mediterranean to the land-locked Midlands.

Crisp manufacturers Taste of Game continue to bring something different to a traditional standby although there is now a wide range of savoury snacks made from anything other than potato.

Drinks-wise, energy and health products still command an expanding market and if it’s the alcoholic variety that grabs your interest cider is still a strong area, gin is an expanding one and although there wasn’t as much craft beer on display as its current popularity might have indicated, the Small Beer brewery’s range of low alcohol products had all the taste and depth of flavour expected from their full-strength brethren.

And finally, kudos to the woman behind pie manufacturers Life, Fork & Spoon for the most original sales pitch of the shows “It’s not as bad as it sounds,” she said about their cauliflower cheese tart. And it was, not to put too fine a point on it, bloody lovely.