Fans of prose and poetry alike can rejoice, as the tremendously popular The Ramblers Ball will return to Evolve on Tuesday 2nd April. Building on its successful debut last year, the stage is set once again for the spoken word open-mic event. What’s more, prolific spoken word artist and community activist Midnight Shelley will be headlining the evening, bringing their powerful signature style.

So far, the stage has already welcomed the likes of headliners Casey Bailey, Bethany Slinn, Adjei Sun, and Mina Mekic. Now Midnight Shelley will add their name to the very talented list.

With Mancunian roots and a Nottingham postcode, Midnight Shelley performs across the country and has featured on the bills of festivals including Shambala, Rebellion Punk Festival, Cheltenham Literature Festival, Lime Tree Music Festival, Femstival, and Green Gathering. 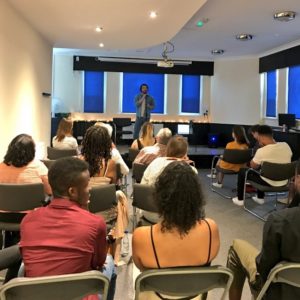 Primarily a storyteller, they use words to shed light into the corners of life often passed over; identifying proudly as underclass, and an advocate of grass-roots organising and the DIY ethos, their performances have been described as a “transcendent experience”.

Speaking about the upcoming event, Casey Bailey commented: “I am ridiculously excited about the return of The Ramblers Ball, the whole team involved put in a lot of work to make it happen, and it never lets the audience down.

“This time definitely going to live up to that, with Midnight Shelley coming through! She is like a whirlwind on the stage, and her passion, for everything that she does is inspirational. She’s going to leave us all with something special to take away.”

Held at Evolve’s Digbeth café in collaboration with local lyricist and previous headliner Casey Bailey, the event is a celebration of poetry in all its guises, hearing from published performers and amateur enthusiasts. Whether partial to a poem, a fan of flash fiction, or a sucker for a short story, budding poets will be able to have their time in the limelight too. The night offers pre-bookable open mic slots, as well as opportunities to sign up on the night for those that feel inspired to do so.

Alongside this food for thought, Evolve will also be serving up a menu of tasty treats. From coffee and cake through to a delicious meal, guests will be able to have their fill of food while they digest their thoughts. Good for both the mind and the body, guests can also rest assured that it is good for the soul, with the proceeds being directly invested back into the social enterprise café.

So far, the evenings have raised hundreds of pounds worth of donations in total from those who attended, and next month it’s hoping to make even more. 100% of the money made goes back into funding Evolve’s mission, of helping at-risk young people find and maintain employment. A project of addiction charity Aquarius’, Evolve now has two cafes in Birmingham, both of which employ and train young people who have faced barriers to finding work.

Commenting on the impact of The Ramblers Ball so far, Kate Hemming, project lead for Evolve, said: “The young people we employ have been so inspired and empowered by The Ramblers Ball, and they are so pleased it is coming back. The passion project of Sam, one of the young people who has now graduated the programme, the event has given our employees such confidence and has even seen a couple of them take to the stage themselves.

“For me and my colleagues, the series so far has been phenomenal to watch and powerful to be part of, and we can’t wait for this one!”

The Ramblers Ball returns at 6pm on Wednesday 2n d April to Evolve at The Adam & Eve, 201 Bradford Street. Tickets are free, but organisers ask attendees to pay-as-they-feel on the night to raise money for Evolve. Sign up for your ticket via Eventbrite. To register your interest or sign up for an open mic slot, email hattie@eastvillageagency.com.