Labour members of campaigning grassroots organisation in Birmingham Hall Green have signed an open letter calling for their MP, Roger Godsiff, to ensure he opposes a No Deal Brexit and supports a People’s Vote.

Although Godsiff has consistently voiced his support for another referendum, last month he supported the Conservative’s Brady amendment calling for a renegotiation of the Irish Backstop, and has in the past voted against the Cooper amendment, which called for a delay to Brexit whilst MPs tried to find a deal. 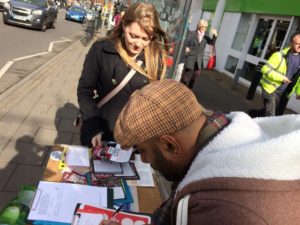 The letter, from the Labour for a People’s Vote group, says: “Whether you voted to leave or remain in the European Union, it is clear that the current mess is not what anyone voted for. People voted to leave for patriotic reasons, such as to provide more funding to the NHS, yet it is clear that politicians have been unable to square the impossible promises made in the referendum campaign with the reality of Brexit.

” Now that MPs have shown they cannot solve the mess, we firmly believe that it is up to ordinary people to break the deadlock. We need a People’s Vote. Therefore we urge our MP, Roger Godsiff, to back any amendments which allow the people the chance to clear up this mess by allowing another referendum, and then to campaign for Britain to remain in the European Union.”

Jason Kelly, a Labour for a People’s Vote activist in Hall Green CLP said: “When Roger Godsiff voted for the Brady amendment, Labour members and activists across the CLP were furious.

“We summoned Roger to a special constituency meeting to ask him to explain his actions, and passed motions to ensure he votes with the Labour whip on future Brexit votes.

“This damaging Tory Brexit is bad for jobs, bad for businesses and bad for workers’ rights, and every Labour MP’s duty is to oppose this bad deal and allow the public to decide what happens next with Brexit, either with a General Election or another Referendum.”