LGBTI community ‘come out’ to break bread with concerned parents.

On Sunday 17th March members from the LGBTQI community informally met with “concerned community members”; including several parents associated to Parkfield Community School, over a curry to discuss the school’s recently suspended diversity programme No Outsiders.

This is the second time the two groups have come together in the space of one week. The meetings have been independently organised by representatives from each group in a hope to start a positive dialogue and encourage better understandings.

No Outsiders was suspended earlier this week after parents routinely protested against the use of the programme outside it’s gates. The school have commented that the programme will not be taught “until a resolution has been reached”. 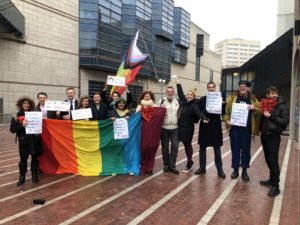 The LGBTQI community who had not yet publicly responded to the protests, took to the streets of Birmingham on Saturday 16th March with a peaceful counter protest, organised by the group Supporting Education of Equality and Diversity in Schools.

SEEDS is an online group that supports the existing teaching of Equality and Diversity, such as No Outsiders, set-up by educational professionals, many of whom are LGBTQI themselves.

Ann Sawyer, founder of SEEDS, commented “We as a community are heartbroken by the recent suspension of the No Outsiders programme at Parkfield Community School. No Outsiders is a successful diversity programme that has been successfully running in schools across the UK for the last four years.

“We wholeheartedly are against the opposition both the school and programme itself is facing, and we want to help more schools to be bold enough to follow in its footsteps. Many of us work in education, many are LGBTQI, all are concerned about the wellbeing of young people and that they are able to learn about living without shame.

“We have deep concern with the homophobic undertones that lie at the heart of the protests and have started meeting with community members to help better understandings for both sides.”

The protests from parents have been widely condemned by MPs, the West Midland Mayor, Andy Street and LGBTI groups across the city.

*Cllr John Cotton, Cabinet Member for Social Inclusion, Community Safety and Equalities, commented, “Birmingham is a place of tolerance and mutual respect, where people of all faiths and none, all sexualities, all ethnicities, come together in pursuit of a common aim. This council will continue to champion these values and support all communities in putting them into action. ”

Andy Street added, “The education of our children is a vital part of ensuring that each generation is more tolerant than the last.”

University of Birmingham LGBT Rainbow network have commented, “As a committee we fully support No Outsiders and record concern about the protests.”