Richard Lutz saunters down to Shakespeareland. 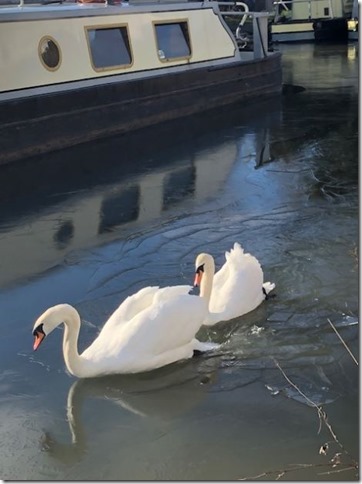 It’s cold. No doubt about that. Not Chicago cold. Not Highlands cold. But cold for middle England. We walk from the south Warwickshire village of Wilmcote to Stratford. A big beast of a swan is playing ice breaker on the canal. You can hear the slow cold pace as he cracks the frozen water. It’s like a chain whipped against a brick wall.

Behind, patient, calm, is his partner. The lead swan is doing the heavy work, past moored boats, past tiny homes that lean toward the canal waters, past joggers and lots of noisy ducks and bobbing wagtails. He makes a steady pace. Then suddenly, as if he couldn’t be bothered any more, he suddenly revs up, takes flight for thirty metres and skids another ten on the ice. Then he stops and, for some reason, who knows what goes on inside a swan’s head, he jumps onto the bank and waddles back to his partner. Maybe forgot the car keys or his wallet.

We head for Stratford to the home of another swan – the Swan of Stratford, the nickname for Shakespeare. It’s his home town though he buggered off to London at an early age to try his luck as an actor- and then tried a bit of writing. He was also known as the ‘upstart crow’ by his detractors. 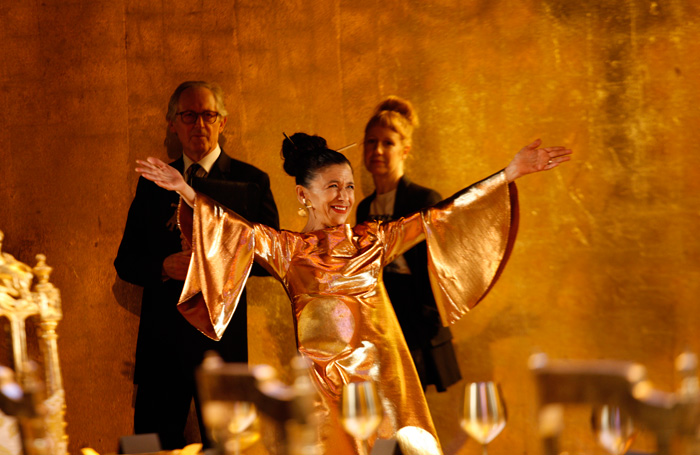 I come to watch his least known play, Timon of Athens. He co-wrote it with Thomas Middleton and it’s better than I thought. It is the only one of his known works that has no romance in it, no wife for Timon, no lover, no daughter. It is, in fact, a cold-hearted play, a hard-nosed look at human nature and filthy lucre and how greed propels the devious track of mankind. Marx said it was his favourite Shakespeare work.

I guess it is so little performed because of this lack of love in it. Timon (played by gender-changing Katheryn Hunter as above) is wealthy, gives her money away and when she herself falls into debt, finds there is no pity from creditors. Like Lear, she heads for the bleak margins of terrain – in this case the barren shore. There she find a pot of gold and once again becomes everyone’s pal.

One commentator noted that it proved unpopular because the play criticised all the new wealth that would populate a theatre back in the early 17th century. Despite the collaboration, I like the language and could hear when Shakespeare dipped his quill into the writing – as in the description of a poverty-stricken Timon and the cold winter of her empty purse.

And cold it is as I step back out onto Stratford’s streets. The train back chugs through a quickly darkening Warwickshire countryside with a red horizon fading over the frozen land. It grows dimmer and dimmer in the west until the cold night blankets our route home.

One thought on “Swans of Stratford”