A senior environment manager at High Speed Two Limited is taking on an arduous personal challenge to raise awareness of a cancer that one in every eight UK men will get in their lifetime.

After her father was diagnosed with the disease last year Rosie was impressed with the level of care he received and wanted to give back. She said: “When someone you love is diagnosed with cancer it is absolutely terrifying and it made me feel completely powerless. I had to do something positive to help raise awareness of prostate cancer. I also have three brothers who are now at high risk of the disease in later life.

“My colleagues’ reaction to the challenge has been fantastic. People have been extremely generous and many have shared their own experiences of cancer as well as thanking me for raising an issue that many men are too nervous to talk about.

“HS2 Ltd is a hugely diverse organisation, therefore raising awareness of prostate cancer to my colleagues is crucial and we must encourage men to speak to their GP if they have any concerns.”

Based at HS2 Ltd’s Birmingham headquarters, 35 year-old Rosie ran the Gloucester Half Marathon last month and has already raised £2,000. She will take on the Leicestershire Half Marathon this Sunday at Prestwold Hall. 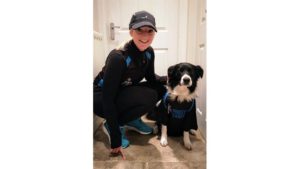 Later this year, Cardiff-born Rosie will run half marathons in Bath, Leamington Spa and Lichfield, as well heading to the USA for the ZombieRunner San Francisco in September.

Gabriella Bailey, Interim Director of Fundraising at Prostate Cancer UK, said: “We’re so grateful that Rosie has decided to take on this challenge to help raise vital funds for Prostate Cancer UK. The money raised will help us fund research for real change, from more effective testing to better treatments.

“Currently, one man dies every 45 minutes from prostate cancer, which is simply unacceptable. We need to turn the game around for men and make prostate cancer a disease that the next generation of men do not fear. We thank Rosie for joining the fight and wish her every success with her challenge.”

As well as the half marathons, Rosie and her team members are planning a series of events to raise more money for Prostate Cancer UK. Rosie is also hoping that members of HS2 Ltd’s own running club can be convinced to run alongside her as she attempts her challenge.

She also intends to set up a workplace support group for those who have been affected by cancer, and there will be a dedicated area in the office that will offer material on the symptoms of prostate cancer and the importance of early detection.

You can support Rosie’s 12 in 12 challenge by donating via her JustGiving page.