In 1979 Derek Bishton, Brian Homer and John Reardon created a pop up photography studio on the street outside a terraced house in Grove Lane, Handsworth, Birmingham.

Instead of taking the photographs themselves, they invited passers-by to take their own image, passing them the shutter release so they could control the decisive moment of how to present themselves and when they were ready for the picture to be taken. In 1979, the opportunity to photograph oneself was relatively unheard of outside of more formal contexts such as passport photographs and weddings.

More than 500 people stopped by to take part in this ground-breaking ‘selfie’ project – some alone, some with friends or family, some striking formal poses, others being more playful. Everyone involved was offered the opportunity of receiving a free print, and the project – which ran at weekends from August to October – generated a unique archive of images providing an insight into who was living and working in Handsworth at that time. 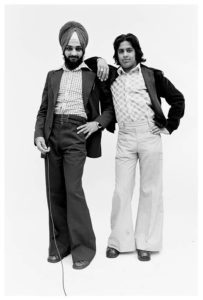 Now, forty years on, the Handsworth Self Portrait: 40 years On exhibition at the MAC arts centre presents 44 original photographic prints made by John Reardon at the time, kindly on loan from Birmingham Museums Trust on behalf of Birmingham City Council, alongside more than 200 images curated from the original negatives by Derek Bishton which have never before been seen in public. Selected portraits will also be enlarged on vinyl across the entire width of the interior wall of MAC’s café.

This collection of images presents a snapshot of a vibrant, multicultural community at the moment it first became visible, and offers an opportunity to look back at our local communities to see what has changed.

Derek Bishton explains: “For most people who took part it was just a bit of a laugh. As photographers we had a serious intent because we recognised that Handsworth, at that time, was undergoing a radical change in terms of the demographics of the area. It was really the UK’s first multicultural suburb, and we wanted to make a record of that moment and give the people a role in creating that record.

“We wanted to challenge the negative representation of Handsworth people in the local and national newspapers and give people a chance to literally and figuratively put themselves in the frame, to represent themselves. I think one of the great joys when you look back on the self-portraits is seeing how well people of all ages and backgrounds presented themselves. How good they look.”

Handsworth Self Portrait: 40 Years On – opens on Saturday 30th March from 2pm-4pm and see further related events below.