A lasting legacy has been established for an Austrian Jew who moved to England to escape Nazi persecution and studied at Solihull School as the fourth generation of his family starts their education at the leading independent school.

Walter Rabl left Vienna in July 1939 as part of the Kindertransport humanitarian programme, which saw nearly 10,000 mainly Jewish children from across Europe rescued and moved to the United Kingdom in the nine months before the outbreak of the Second World War.

This month marks the 80th anniversary of the first Kindertransport train leaving Berlin, but it was on one of the final trains that Walter, then aged 14, came to the UK. He was fostered by the Ewing family in Solihull and was given a place at the school from 1939 to 1941, before joining the Pioneer Corps as a translator. 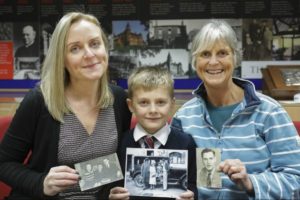 Sadly, his parents and many more of his family members were murdered at the Riga concentration camp in Latvia, but he made a life for himself in the UK and married Grace Lyles in 1952 – an event which set in motion a lifelong connection with Solihull School.

Walter and Grace had a daughter, Tricia, whose husband Rob Parry attended the school, before their daughter Katie attended the sixth form. To bring the story right up to date, Katie’s son William Mansell started at the junior school at the start of the autumn term.

Tricia said: “It is amazing to think my dad’s parents had the foresight to send him to the UK before the start of the war. His school report mentions he was happier towards the end of his time at the school, before he realised that something very wrong had gone on at home.

“His brother Egon had been incarcerated at Dachau before the war and, although he was released, he lost a leg through frostbite and suffered a lot. It was then his parents realised something terribly wrong was happening.

“Dad was on one of the last trains to leave, so he was one of the lucky ones, but it must have been terrible to have to leave your home.”

Solihull School has invited Walter’s family to the European schools’ premiere of the film No Asylum, which it is co-hosting in January to commemorate Holocaust Memorial Day, in partnership with the Anne Frank Trust UK. The film, which reveals new information about Anne Frank’s family struggle to obtain visas and flee the Nazis, is

Solihull’s second Holocaust-related premiere in two years, following the screening of Tomi Reichental’s Condemned to Remember in January. During the premiere, the school will commemorate Walter, who was a Chartered Secretary for most of his working life in the UK. He was also a keen sportsman, who encouraged his two daughters to become successful swimmers and was a founder member of the Motorway Swimming League and Orion Swimming team, which survives today. He was also a very keen bridge player.

Walter died aged just 62 but his daughter Tricia is still in touch with Bob, the son of Constance and Alfred Ewings, who fostered Walter during his first year, before he boarded in his second. Walter and Grace had a second daughter, Angela, three grandchildren and two great grandsons.

“It is absolutely lovely he is being remembered by Solihull School. He always said he wanted to be remembered and it is particularly apt on the 80th anniversary of the first Kindertransport train leaving Berlin,” Tricia added.