Brum 130 – Beyond Bricks and Mortar is an event taking place on Monday 14th January, from 4pm-6pm to celebrate the city’s 130th birthday. 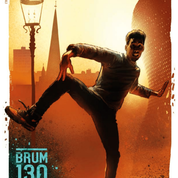 In January 1889, Birmingham was officially granted City status. In the 130 years that have followed, Birmingham has grown into a diverse, vibrant and confident place to live and work. In this special pop-up event, the spirit of the city and its people are captured with projections that glimpse at Birmingham’s past and present, plus performances from the city’s thriving cultural scene.

To help commemorate the event Birmingham’s iconic Council House in Victoria Square will be taken over with digital projections and performance.

This is a free public event created by Mohammed Ali MBE and Steady Steadman on behalf of Culture Central. You can find out more via culturecentral.co.uk or the Birmingham Weekender instagram or twitter (@BhamWeekender).