As a pupil at Holte Secondary School in Lozells, Iram Shariff was so inspired by City Year UK volunteers that it convinced her to dedicate a year of her life to volunteer full-time for the same charity after she left school.

Now 20 years old, Iram has been volunteering for City Year UK in The Phoenix Collegiate, West Bromwich, since the beginning of the academic year and is already seeing the impact of her efforts. 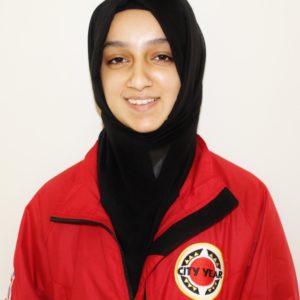 tured) said: “I went to Holte School and would always see City Year volunteers walking around. They gave extra support to help kids who needed to build their confidence and ran all sorts of after school clubs. I saw a change in the kids they worked with – I saw them grow as people. And, I could see the change in the school as well.

“In my last year of sixth form, some of my friends joined City Year and they all told me how great it was and how it opened up so many opportunities to them. I had always wanted to do it, so when City Year came to my university opening day I grabbed my chance.

“I’ve loved my City Year experience so far – it’s a massive challenge but really rewarding. Two of the pupils I work with directly have already started to improve their grades dramatically. I’ve also organised a Macmillan Coffee Morning that the pupils really enjoyed and raised £100, and set up an after school Badminton Club with my team which more and more pupils and teachers are coming to every week.”

City Year UK’s Chief Executive, Kevin Munday, said: “Our aim is to give young people the skills and confidence they need to change the lives of the pupils they work with, improve their communities and boost their own life chances. But we also want to inspire others to follow in their footsteps.

£That’s why we’re so proud to have Iram as one of our volunteers and that her experience as a pupil at one of our founding school partners in the West Midlands has inspired her to join us and support those who need it most.”

Iram is telling her story as part of this year’s #iwillWeek. Each November on the anniversary of the creation of the #iwill campaign, the charities, businesses and public sector organisations that comprise the campaign join to communicate the benefits of youth social action. The theme of this year’s week, which runs from 12th-16th November, is ‘Their voice. Their impact. Their story.’.

City Year UK is recruiting now in the West Midlands for January starts for their schools-based social action programme.