A firm fixture on the city’s packed festive calendar, Birmingham Bach Choir return to St Alban’s Church, Birmingham, for a service of Nine Lessons and Carols on Sunday 16th December.

The exceedingly popular annual afternoon event (which traditionally takes place on the last Sunday before Christmas), features a series of Bible readings telling the Christmas story, with seasonal music performed by the choir, interspersed with congregational carols.

Led by conductor Paul Spicer and accompanied by organist Paul Carr, join in with such seasonal favourites as O Come All Ye Faithful, Once In Royal David’s City, Hark The 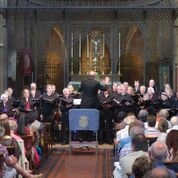 Herald Angels Sing and It Came Upon A Midnight Clear.

Meanwhile, the choir will perform beautiful arrangements of well-loved carols including In The Bleak Midwinter, as well as some lesser known songs, including Howell’s magical Here Is The Little Door and his Magnificat, plus an arrangement of Sir Christèmas. Written by David Hughes (a bass singer in the choir), Sir Christèmas was first performed last Christmas on Radio 3 as one of the six finalists in the BBC Radio 3 Breakfast Carol Competition 2017.

Sarah Platt, Chair of Birmingham Bach Choir, said: “Close to the city centre, St Alban’s is a magnificent venue for our traditional afternoon Nine Lessons and Carols service, which epitomises the true spirit of Christmas, and offers a moment of calm during the frantic run up to Christmas Day.

“We’re very much looking forward to singing this year’s selection of familiar favourites as well as lesser known though beautifully moving carols, such as John Rutter’s Nativity Carol, Richard Dering’s Quem Vidistis, Pastores and the wonderful pieces by Herbert Howells.”

Join Birmingham Bach Choir for Nine Lessons and Carols on Sunday 16 December 2018 at St Alban’s Church, Conybere Street, Highgate, Birmingham B12 0YH at 3.30pm. Admission is free (with a collection during the service). For more information, see: www.birmingham.bachchoir.com