Birmingham Royal Ballet’s beloved production of The Nutcracker, which has captured the hearts and imaginations of generations of theatregoers to become an annual tradition, returns to Birmingham Hippodrome from 23rd November–13th December.

Created in 1990 as a gift to the city of Birmingham, Sir Peter Wright’s The Nutcracker combines gigantic sets, lavish costumes, 60 dancers and instantly recognisable music played by the Royal Ballet Sinfonia to create the perfect Christmas treat for the entire family. Join young Clara as she is swept away into an enchanting winter wonderland of dancing snowflakes and a Sugar Plum Fairy. Her magical Christmas tree and her handsome prince with his army of toy soldiers are an unforgettable delight.

The scale of this astonishing festive production is breath-taking; hundreds of wardrobe, wigs, lighting, sound, stage management and administrative staff work on the show for months before the dancers and orchestra take to the stage to delight audiences. 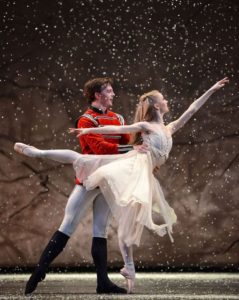 The Nutcracker in facts and figures:
– By the end of its 2018 season, Sir Peter Wright’s production of The Nutcracker will have been performed a total of 570 times.

– Before the curtain goes up on the first performance, hours of work have been undertaken behind the scenes. The sets, props and lights for the show travel to the Hippodrome in five articulated trucks from the Birmingham Royal Ballet stores in Dudley. When the sets arrive work will begin on the ‘get-in’ and ‘fit-up’. This process takes approximately three days. Another two days are usually required for technical and stage rehearsals.

– The production has a flying goose that transports Clara to a magical land – it travels 20 metres across the stage at every performance. This means that the goose has travelled just over seven miles at Birmingham Hippodrome since 1990.

– The Nutcracker features a huge transformation scene where a Christmas tree grows from 4m to 15m and a fireplace grows to fill half of the stage. A crew of around 50 people work backstage on the production.

– 75kg of flame retardant artificial snow is used in the production; it is imported from a specialist company in New York.

– The production has over 200 costumes.

– Since its first performance back in 1990, dancers playing the role of ‘snowflakes’ in The Nutcracker have made their way through over 720 cans of silver sparkle body paint.

– The Nutcracker features over 45 wigs and pieces of facial hair.