At least eight thousand people saw UB40 play their first gig at the Hare & Hounds and I’ve probably spoken to them all. Every one of them knew right away that the band would go on to top the charts around the world and become one of Birmingham’s biggest musical exports, even if like most things that come from here the city doesn’t make as much of them as it should.

Forty years, seventy million album and a well-publicised and acrimonious feud later, the band are back where it all started, playing a secret gig for competition winners and what singer Duncan Campbell called “an A-Z of our fan club members” to launch new album For the Many.

It was hot, crowded, and the audience appear more used to seeing the band on stages bigger than the main room at the Hare & Hounds. While queuing to get up the stairs I heard a couple of the pub’s regulars who didn’t believe that this was the authentic, proper UB40 and not a tribute, but as the scheduled 5pm start time approaches there’s security men blocking the approach from the door to the stage, the sound of a sax being tuned wafts into the room and not far behind are Duncan, Brian Travers and the rest. 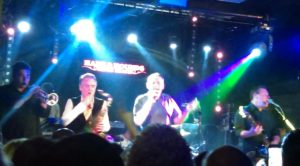 Now I have to admit that I probably shouldn’t have been there. I’m not a great fan of the band and there are people who would have sold their first-born for the chance to be within touching distance of their idols, but the chance to see UB40 opening with Food for Thought at the Hare & Hounds is something you don’t pass up. It’s a real hairs on the back of the neck moment even if the brass section are a bit untidy right at the start.

That little niggle, though, soon rights itself and the nostalgia continues with Tyler and King. It’s a selection from one of the great Brummie albums and the band are loving it as much as the spellbound audience, who have traveled from all over the country to be here.

Duncan and Brian are up front and mastering the ceremonies; the new guy’s voice adding a soulful element to the vocals, the original member once more proving to be the heartbeat of the band. It’s time for the new material, and I’m Alright Jack sees longtime band associate Pablo Rider joining to add some vitriolic lyrics relevant to the album’s title and the state of the nation.

Gravy Train is in the same vein and both songs show how UB40’s targets are the same as when they started out; only the delivery has changed. You can sing about the wasteland of mass unemployment when you’re young and on the dole but when you’re a bit older the words might have less relevance. But you can still write songs from the view of someone who knows the world is badly in need of a radical change.

New single Moonlight Lover features guest singer Gilly G and fits well into the canon of UB40 covers, then it’s time to get the phone lights out for a singalong of Kingston Town which gets the biggest response of the set and is probably the one that most of this audience can identify with closest. Here I am Baby closes the set with some mean sax/guitar soloing and the band are fighting their way through the audience and offstage.

It might be the shortest gig they’ve played for many a year, as well as the smallest, but I don’t doubt that for everyone in the crowd it was something they’ll remember for a long, long time. And now 8,200 of us can say we’ve seen UB40 play the Hare & Hounds.