2018 marks 100 years since the end of the First World War and, as part of the commemorations, The Royal British Legion launched an exciting competition with Birmingham City University Jewellery School, offering design students the chance to create a commemorative brooch to be sold by the charity. 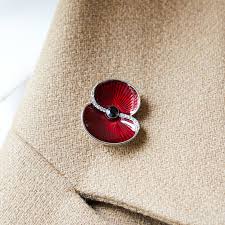 The Legion were overwhelmed by the thoughtful and beautiful entries from students at the jewellery school, but after much deliberation the winner was 21 year old Wai Yiu Chung, with her Infinity Brooch design.

Wai Yiu was inspired to enter the competition after reading about some of the beneficiaries the Legion has helped over the years and the judges thought her design showethe perfect blend of tradition and innovation.

Amy Parr, Retail Buyer at The Poppy Shop, said, “We chose Wai Yiu’s design as it keeps strong aspects of our traditional poppy brooches, used to symbolise and remember the sacrifices made during the war, but, with its delicate crystal swirl, it also reflects the fact that this year we want to say Thank You to everyone who made a contribution during the First World War; from women working in munition factories to the poets and painters who recorded history in words and pictures. Wai Yiu’s design captures both aspects of this perfectly and we’re excited to have turned her design into a stunning brooch.”

Wai Yiu’s winning Infinity Brooch is available for £14.99 from The Royal British Legion’s Pop Up Shop in Intu Merryhill (which will be open from 22nd October–11th November), their Pop In Centre at 87 New Street and the online Poppy Shop www.poppyshop.org.uk