World premiere produced by DanceXchange and commissioned by Sky Arts through Art 50.

From 29th November until 1st December join the Speaker of the House at Birmingham School of Art for the world premiere of This Is an Island? produced by DanceXchange with creative direction by Gary Clarke. This performance is a Sky Arts commission through the Art 50 programme which explores the notion of British identity in the wake of Brexit.

This Is an Island? invites audiences to experience a no holds barred version of the motivations behind the referendum vote through the eyes of Birmingham residents, who were split almost 50/50 over Brexit. Interviews, comments, actions and views are transformed into a thought-provoking and exciting multi-sensory journey. 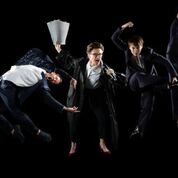 Through a partnership with Birmingham City University the performance will be staged in a gallery space within Birmingham School of Art in the heart of the city, lending a unique atmosphere to the piece.

Audiences will be taken on a journey through an imagined forum, similar in structure to the House of Commons, experiencing first-hand the voices and opinions of the people of Birmingham through dance, spoken word, Installations and film.

The piece has developed from conversations which took place in May 2018 when a group of artists went out on to the streets of the city to discuss Brexit and what it means to be British, through a series of road shows supported by DanceXchange and the Brexit Studies department at Birmingham City University.

This Is An Island? will be a part of the Art 50 Festivals taking place at prestigious locations such as The Barbican, Sage and Baltic in February 2019. Extracts from the show will premiere on screen on Sky Arts to coincide with the official exit from the European Union on the 29th March 2019.