The new £57 million music college has been recognised in the Excellence and Innovation in the Arts category, with all nominations announced on Thursday 6 September.

Known as the ‘Oscars of higher education’, the national THE Awards offer recognition across 18 categories which cover the full range of university activity.

The historic Conservatoire’s new state-of-the-art home is the first purpose-built music college to be constructed in the UK since 1987 and the only one in the country which has been specifically designed to cater for the demands of the digital age.

Granted a Royal title by Her Majesty The Queen following its opening in September 2017, the bestowment follows the HRH The Earl of Wessex becoming the Conservatoire’s first Royal Patron in March 2016.

Royal Birmingham Conservatoire Principal, Professor Lloyd Webber (pictured), a world renowned cellist who oversaw the move to the new home, said the building delivered on every level: “It gives students the best possible learning environment, it is open to the public as a peerless performance venue, adds hugely to the cultural landscape of the city and accelerates our reputation as a ‘university without walls’.” 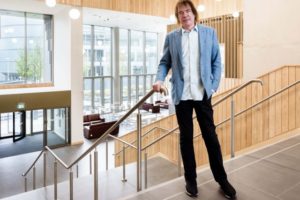 “I have said before that I believe our new conservatoire will be the last of its kind in the UK and it comes at just the time when it is most needed by the musicians of the future in a challenging landscape for arts education.

To be recognised by the THE, therefore, is not only a huge honour for the Conservatoire and Birmingham City University, but recognises the efforts we are making to ensure classical music is open to everyone and that we are inspiring the next generation of world-class performers.”

The building features five public performance spaces including the 500-seat Bradshaw Hall – capable of staging a full symphony orchestra and chorus, and with acoustics that make a quiet conversation easily audible from 30 metres away.

Staff at Royal Birmingham Conservatoire will find out if they have won at the ceremony for the 14th annual ‘THE’ Awards which will take place at the Grosvenor House Hotel on Park Lane in London on Thursday 29 November.

THE Editor, John Gill, commented: “Times Higher Education is extremely proud to host these awards once again. In yet another record year for entries, and with over 70 institutions represented on the shortlist, it’s a genuine privilege for the ‘THE’ team and our judges to read through these many and varied tales of excellence from all corners of the UK.

“It’s a significant achievement to make this shortlist, and we look forward to honouring all the finalists at the Grosvenor in November.”

Earlier this year, Royal Birmingham Conservatoire was crowned West Midlands Project of the Year by the Royal Institution of Chartered Surveyors and the West Midlands’ Building of the Year 2018 by the Royal Institute of British Architects. As a result of the latter, the Conservatoire is now being considered for a RIBA National Award, from which the shortlist for the coveted Stirling Prize will be drawn.