Recollections of Monyhull to be presented in public event.

If you mention Monyhull Hospital to anyone who lived in Brandwood or Kings Norton, they’ll remember certain scare stories about it, but local charity CASBA has spent the last year collecting the true stories of the people who lived and worked there.

Made possible by players of the National Lottery, with a £44,000 grant awarded by the Heritage Lottery Fund, CASBA’s From Institution to Community project was launched in September 2017.The stories they have collected will be presented in a free event at Monyhull Church on 6th October to give a new insight into the history of people with 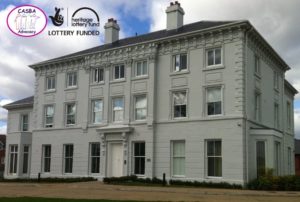 Opened in 1908 as “Monyhull Colony for the Feeble Minded and Sane Epileptics”, Monyhull was a long-stay hospital for people with learning disabilities, but most people considered it “a loony bin” or “madhouse”. It was a dare to go near the place, kids would run screaming if the fire alarm went off thinking someone had escaped and the term “Monnies” was used as an insult at schools in the area for people who did stupid things.

Project Coordinator, Joe Peacock, said: “This has been a fascinating project to work on and I’m so glad that we can help to correct some of the misconceptions that existed around the people who lived in the hospital. Thanks to players of the National Lottery, their stories will contribute to a much better understanding of this important element of local history and we’re proud that it’s the first such project in Birmingham.”

CASBA celebrated its 30th anniversary this year, having been formed in 1988 to support people leaving Monyhull Hospital to begin new lives in the community. With Monyhull Hospital closing twenty years ago, they felt this was the perfect time to capture these stories and look at the changes in the lives of people with Learning Disabilities now.

Everyone interested in learning about the history of this prominent institution and the story of its closure is invited to attend CASBA’s event at Monyhull Church on Saturday 6th October from 1:30pm to 4:00pm. A new film about Monyhull will be premiered, as well as a specially commissioned work of drama and there will be a chance to hear from former staff and residents, as well as an exhibition revealing more about the history of Monyhull Hospital. Refreshments will be provided.