Through five official albums and a series of EPs, Josienne Clarke and Ben Walker have edged slowly away from the pure ‘folk’ tag of their debut, into newer, bigger realms.

“For the first time I’m out there alone with a bunch of songs that expose my insecurities, fears of failure and inflated pride,” says Josienne, prior to the duo’s appearance at Kenilworth Arts Festival on 27th September. “They deal with my own specific thoughts and feelings about the reality of pursuing this kind of career, the cost to personal relationships, circumstance and lifestyle, and asking the question – ‘Is this still worth it?’

“They’re about trying to find an inner balance in an environment that doesn’t provide any balance or certainty. Where one day everything is brilliant and the next day it could all be over. Where one night ends in a standing ovation and the next starts by playing to an empty room.” 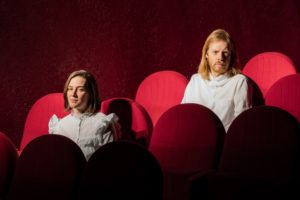 Beginning her collaboration with guitarist/ arranger Ben on her somewhat forgotten solo album, 2010’s One Light Is Gone, the duo have clear roles to play.

“It’s less exciting for people,” she says, discussing their writing process, “they imagine us hashing things out together in a parquet floor room somewhere. But usually I write the songs, the lyric, melody and basic chord structure, and then I take it to Ben and we kind of start to pull it out into something grander than what it would be on its own.

“He’s not really a songwriter, he doesn’t get involved in that side of it, though he does guitar composition and stuff. He gets involved at the arrangement stage, and has a knack for pulling out an interesting thread in the song and fashioning it into something grand and amazing.”

It’s a process that works well, impressing such A-listers as Robert Plant, who praised them in person after a London appearance, and Richard Thompson, who invited them to open his 2017 acoustic UK tour.

“That was a real treat for a number of reasons,” enthuses Josienne. “Obviously, for one, he ticks a boxes for both Ben and I – he’s a fabulous guitarist, great songwriter, was in Fairport Convention. He was on the list of ideal people to get near to, and he’s an incredibly nice guy as well. He’s really smiley.

“That tour, him on his own, was perfect for what Ben and I do, being that sparse material. The rooms he played were ideal, lovely, and the audience he has was the perfect crossover.

“We were quite bold in our approach to it,” she continues. “We opened with Reynardine, one of the big Fairport Convention traditional songs [from 1969’s seminal Liege and Lief] and one of the big Sandy Denny numbers. “It was a gamble and it paid off. We got a really nice reception from his audience, they really listened. I think we were in the right ballpark for them.

“It was a thoroughly pleasant experience from beginning to end.”