Richard Nevin looks back on a day at the recent test match.

I’ll admit it, I’m a Luddite. I refuse to call it Edgbaston Stadium and refer to it as Warwickshire County Cricket Ground or simply Edgbaston.

In a similar way I’m a big fan of five day test cricket, an almost endangered species to such a point that a cricketer posing with a One Day or 20/20 trophy is regarded with the same contempt as one of those horrible rich people who despatch beautiful wild animals and then have their picture taken with the corpse.

Test cricket is far from being a corpse, although ticket sales for the first two days of this test were disappointing, interest peaked for days three and four and it was the first of these that I attended hopeful of fine weather and fine cricket. On both counts I was richly rewarded.

You can read about the match elsewhere, safe to say us test fans came away with a rather smug air and the cheerleaders for the five day game in the media were particularly vocal. But what of the day itself from a spectators viewpoint? 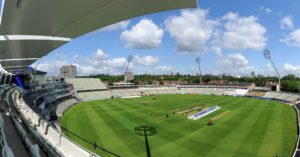 Much had been made of the high prices affecting sales, not to mention the cost of food and drink and in the case of the latter I didn’t see anything other than the same market rates for similar events. That’s not to say that lower prices wouldn’t be welcome but one comes to expect such costs and how they dictate whether you are likely to attend. And it’s the attendance that tells you whether the price of the tickets is correct.

The fact that the ground was only just full for one of the four days indicates that either the hierarchy at Edgbaston have the got the pricing wrong or people are not that interested in Test cricket anymore, I suspect it’s a bit of both. The quality of the Test itself will help with one aspect, lower ticket prices for anything these days is something along the lines of wishful thinking, although value can be sought depending on where you sit.

Where to sit at WCCG is another choice to be made depending on what sort of day you want. Me and my companions tend to fall between two stools, we want to watch the game but also like to be part of the atmosphere that only the Eric Hollies Stand can provide.

Often described as boorish, vulgar and full of people who value a drink more than a swift over rate, this raucous enclosure has almost come to define tests at Edgbaston to the point where the club promote it as the party stand and from where the players both draw and extol encouragement. Our tickets saw us stationed on the fringes of this area, where one can follow the game without too much interruption but also enjoy that special atmosphere.

And what an atmosphere, utterly enhanced by the Indian support and brilliant Bharat Army complete with Dhol Drummers leading endless parades along the concourse with exotic beats and much shouting. Then there’s the fancy dress, from the mundane and unimaginative why bothers?, to the well thought-out and executed Kim Jong Un and twenty-odd security men, deadpanning as they swept into the stand an hour into play.

Much maligned as it is, Edgbaston would be a poorer place without the Hollies and certainly wouldn’t be the number one test venue in the country as far as the England players are concerned.

The stewarding and organisation seemed efficient and friendly (apart from the rather spiteful confiscation of a blow up watermelon), the Yorkshire Tea band’s 80’s medley always seems surreal as pitch side entertainment and the all-round atmosphere was convivial and comfortable. It’s a fine balance to achieve, satisfying cricket lovers, beer bellies and kids all at once, perhaps a pricing review might be an idea but with the Aussies in town next summer don’t expect it anytime soon.