Birmingham’s restaurant scene is heating up, after the arrival of Deolali Dhaba, in the heart of Moseley. Offering an Indian twist on some of Britain’s best-loved dishes, teamed with traditional curry house favourites, the independent restaurant is being tipped as one to watch in a city known for its love of spice.

Birmingham’s reputation as the home of the Balti continues to evolve, with everything from traditional street food to progressive Indian cuisine. Finding its place somewhere in the middle is Moseley’s latest arrival, Deolali Dhaba, which has opened its doors offering a welcomed take on both British and Indian classics.

From the keema scotch egg and Tandoori dil salmon, to the Goan fish curry and already infamous Deolali Shepherd’s Pie, the restaurant’s menu pushes the boundaries of Indian flavours. Whilst also staying true to its roots, with best-loved dishes like dum biryani and garlic chilli lamb still on the menu. 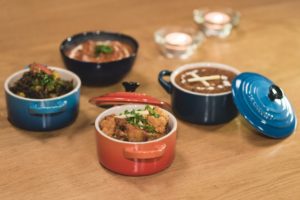 Manager, Tariq Zaman, comments: “Birmingham already has a wealth of authentic Indian cuisine available, so we knew that we needed to offer something different to not just attract food-lovers but keep them coming back.

“Of course, we keep to traditional spices and flavour combinations in our signature dishes, but the menu also offers a point of difference; with dishes like our chicken mo-mo and shepherd’s pie proving that we’re much more than an Indian restaurant.

“Staying true to our name, we’ve gone crazy for new flavours, which I think results in a really exciting addition to a city that is already known worldwide for its foodie offering.”

While the menu is new, the restaurant has a history with the city dating back to 2005, when Deolali was famously a hangout for the likes of Ronnie Wood and UB40. The converted coach house has opened its doors once again, serving up everything from low-key light lunches and after-work drinks, to date night dinners and large celebrations. Its (slightly) new name celebrates the traditional dhaba, often found in Pakistan and India; aroadside restaurant or cafe, serving traditional food, where you can eat out in the open in a very relaxed atmosphere.

Tariq adds: “Following our short pop-up earlier this year, I am delighted to be opening the doors of Deolali once again – even more so because we are back and better than ever. There’s no hiding away from being a victim of our own success before and not quite being able to cope with demand, but an expanded kitchen, some new team members, and a more streamline menu means that Deolali Dhaba really is back with a bang!”

To view the menu and book your table, visit www.deolalirestaurant.co.uk.