Best known for his work with 10cc, Graham Gouldman’s history makes him in demand with some of the biggest names in music, including the biggest of all time. You’ve been touring with Ringo Starr’s All-Starr Band.

“Yes, we finished about a week and a half ago. We went all over Europe, really enjoyed it and we’re off to America in September. I’m not sure why there are no British dates but it’s a real shame.”

Ringo always gets top-quality musicians. After all, nobody turns down the chance to tour with a Beatle.

“Who would? I don’t know anybody. This time round the members of the band are Steve Lukather from Toto, Gregg Rolie from Journey and Santana and Colin Hay from Men at Work.” 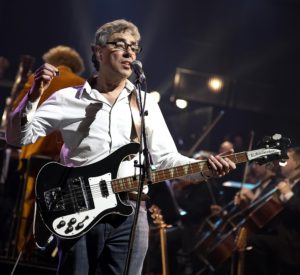 It must be particularly good because 10cc were the sort of band who developed and were influenced by the Beatles.

“All the original members of 10cc had their own influences but we were all influenced by the Beatles, definitely, and we carried that forward. They set the bar very high and we tried to live up to that.”

I’ve spoken to a few people about 10cc lately and they all used the same word – ‘clever’.

“Yes, clever clogs. What can I say? We were clever.”

Clever lyrics, clever arrangements. Another band who developed along post-Beatles lines were ELO, who became bigger and more highly-acclaimed after they split than when they were performing. Maybe it’s time for a 10cc reappraisal as well.

“We’re being reappraised all the time. People talk about the seventies and our place there. I don’t think we get the recognition to be honest, and the reason was that we weren’t that visible a band. Queen and Roxy Music and others, Slade say, if you saw Slade you could see what they were whereas I’m not sure we were that visible but we didn’t really care much about that, we just wanted to make music and make people happy.”

Talking to Steve Harley recently, I said that this was an era where acts got pigeonholed into things that they really weren’t. Were 10cc regarded as a glam, pop band when they were clearly much more than that?

But certainly at that time you managed to brdge that gap between commercial success and critical acclaim. You were getting number ones hits and also the critics loved you, which wasn’t an easy trick to pull off back then. For example, at the start of 1976 Melody Maker said you were something like the brightest hope for British music.

“I agree. We never got the chance to fulfil ourselves really because Kevin and Lol left the band in 1976 and music changed at that time. We carried on having hits but then it changed towards the end of the seventies. The whole music scene changed and there was a reaction against smart music. That really did for us and for a lot of other bands.”

Godley and Creme leaving obviously had a big effect.

“I think if they hadn’t left when they did the band would still be together today. We’d have definitely moved on, never stood still. I don’t know what we would have been doing but I know it would have been good.”

But they did leave, and twelve months later you had what might be your best-known hit with Dreadlock Holiday. People must assume you’re loaded from the Sky cricket royalties with that one.”

And so you’re playing the Solihull SummerFest, which should be a good one.

“Yes. We’ve got a lot of festivals coming up, as well as a tour of provincial cities towards the end of the year. The songs and the music of 10cc live on and audiences 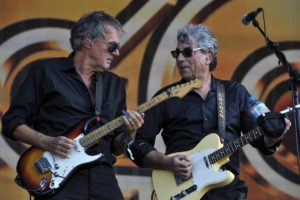 want to hear it. They want to hear a live band. We get a lot of youngsters coming to our gigs, maybe as an antidote to the manufactured music that’s around now.”

Festivals or halls – which do you prefer?

“Both. The music just works everywhere. The personnel of the band has obviously changed but the music’s still the same. We do all they hits you’d expect to hear and a few album tracks, people just love it. That’s why we’re working – I don’t have to ask venues to book us, they book us themselves. There’s a demand for it and we love to play.”

At a gig like Solihull I would imagine there will be a lot of people who maybe don’t think they’re familiar with your music, then you start to play and they remember.

“It’s a case of ‘Oh, I didn’t know that was one of theirs’. That definitely happens.”

Or they’ll just be introduced to some quality music. Sister Sledge are playing as well. That’ll be a double bill to remember – you’ll both have to be on top form. As long as the weather’s alright. Open air and a bank holiday; it’s asking for trouble.

“Don’t say the ‘w’ word, or the ‘r’ word. But we play in all sorts of weather and the audiences enjoy it. They get into the music and it doesn’t matter about the weather.”

Or you can enter our competition to win tickets to each day of the SummerFest. We have a pair to give away for each day – for a chance to win, mail birminghampress@gmail.com with the answer to this question by midnight on Friday 3rd August:

And tell us which day you’d like the tickets for.