One of the things I’ve noticed about your interviews is that the writers often mention that you were once a journalist. Do you think that’s because they’re worried you’re judging them?

“Ha ha. Crikey. that’s a long time ago. I was very young but I’m still steeped in print; I read newspapers like a proofreader. It’s awful, I take the Telegraph, I do the crossword and read the racing pages – I’m not right-wing but I like the paper. Then my wife hands me the Times that she gets free at Waitrose and it has so many errors because there’s no sub=editors anymore. When I was training, and I was with Paul Henderson who went on to be associate editor at the Mirror, we were at the East London Advertiser together. We covered the East End, the Krays patch, with five juniors and one senior reporter.”

Musicians and writers – the one thing they have in common is that it’s hard to get paid work these days.

“What – we shouldn’t be paid? Get outta here, I’m not doing what I do for no money. People should be more interested in where the money goes rather than saying that musicians should be out of pocket. Look at the Stones – Mick’s a businessman more than anything else and he’s the one holding it all together. We played with them in 2010, 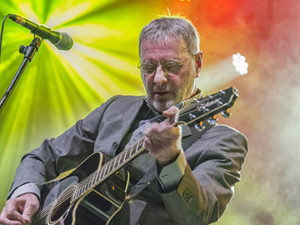 in Warsaw and St Petersburg; when we got back I asked my agent to get a message to Mick saying thank you for how well the band and the crew were treated and I got a reply saying it all comes from the top.

“It’s the same with me – anyone who works for me gets top dollar and they earn it. I won’t take anyone who’s tetchy, difficult, lazy. You can’t have them on the road, everyone has to be a team player and a hard worker. We’ve got these dates coming in, four nights in a sleeper bus and you have to be around like-minded people you enjoy touring with.

“If any of my crew are ill-mannered or disrespectful towards the house crew, the promoter, anyone, that’s it. That’s what they remember, these people are representing you and your name gets passed down the line. I’m not difficult at all, I’m a professional. Seventies roadies could be like Spinal Tap but to survive now you have to be professional.

“The idea that something like YouTube can be so popular and you don’t get a penny can seem strange, but when I say that to fans they point out that tickets get sold off the back of it. I can see how difficult it is for new artists, though.”

You seem to do a few different formats with your live work. There’s solo shows, you do acoustic trio tours, do tour acoustic trios and I see you played with a full orchestra recently, but Leamington is a full-on Cockney Rebel gig.

“I’ve just done some dates with the trio, which is a lovely way to work and I love it very much but then you get up next time and soundcheck with the band and you think ‘Jesus, I missed this’. Then I did the Glasgow Concert Hall recently with an orchestra and choir, which is 57 people on stage and 2,000 in the audience.

“We’re doing one more of them in Rotterdam, they’re big events but after the one in Glasgow I flew down and did five nights to 120 people in London. It’s magical. We have the orchestra because we were playing the first two albums and they were were heavily orchestrated so performing them plus Make Me Smile is the whole package. At Leamington we’ll be on stage two and a quarter hours and I haven’t got a clue what we’ll be doing yet.”

It must be difficult when you play the opening of THAT song and two thousand people start singing it back to you.

“It’s wonderful. The night before Leamington we’re playing to ten thousand at the Wickham festival and they’ll all be singing it.”

Have you ever been tempted to change the words and confuse the audience abit?

“It wouldn’t be done the done thing, would it? I don’t mind singing it at every show and they sing it back. It’s still as big a thrill for me as it is for everybody else.

“Some artists don’t play their old stuff because they don’t like what they did back then and I can see the point. When we toured a couple of years ago we did the whole of the Best Years of Our Lives album and there were three or four songs that I’m not proud of. They were of their time but they don’t represent me now, whereas the other six songs I was happy with. I won’t be doing that tour again.”

On a local note, it was a gig in Birmingham that marked a turning point in your career some years ago.

“I remember that. It was at Villa Park. Steve Stride, who was the Villa secretary, was a good friend of a very good friend of mine, Brian Southall, who I trained with. Brian said to me that this bloke wanted me to play a solo acoustic gig in front of two hundred people and I thought ‘Why not?’ I had a fiddle player with me on some numbers and it was the start of a whole new life because I loved it, I asked my agent to get me more gigs and I’ve been doing that since. I’ve got the acoustic trio and we have 32 dates lined up. Villa aren’t doing that well now are they? I do follow football but my real passions are music and backing horses.”

Your biggest era was around the mid-seventies. That was when bands were pigeonholed into something they might not have been. Do you think that at another time you might have been thought of differently, maybe had more ‘serious’ credibility?

“You can’t help it because that was what was going on. I had nothing to do with glam rock, we didn’t wear the stack heels or the glitter. My first album was theatrical, it had large elements of theatre about the production and the lyrics, but that was because I was 22 and I was very influenced by films like Cabaret. I got over that very quickly.

“After the Isle of Wight festival and Woodstock we all thought let’s glam out a bit, let’s get rid of the long hair and the beards and be a bit more flamboyant, the same as five years later punk came out and replaced all the glamour with filth and dirt. We always get new trends, or we used to because we don’t seem to anymore. It’s all dried up and everything’s much of a muchness now. It’s an odd thing where a 55 year old is shopping at the same place as his 25 year old son.”

And attending the same gigs. Leamington Assembly on 3rd August, for example.

“I’m really looking forward to it. The Assembly’s a really good venue; I’ve done it a few times and it’s wonderful with the art deco and the caravan backstage. I know tickets sales are going well and with it being a standing gig there’s going to be a lot of people there.”