Ivory Wave join the line-up for Shiiine On: Birmingham.

Birmingham five piece Ivory Wave have been added to the bill of the huge one day Shiiine On Birmingham one day festival taking place at the Genting Arena, NEC on Saturday 8th September.

The event, which sees performances by heavyweights such as Orbital, Shed Seven, Happy Mondays, Embrace, Julian Cope and Cast will see the hometown lads take to the stage in 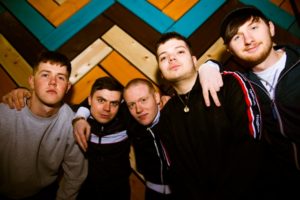 their biggest show to date

Rapidly becoming renowned for their contagious acid house and dance-style tunes, the local lads have set tongues wagging since mid-2016 with a growing army of fans since the release of their infectious anthem and debut single ‘Club.’

The band are carving out their own indie, house style, adding synths to the dance beats and combining this with a raw, Brummie inflected, vocal.

After touring with The Twang last year the boys are now stepping up another gear again joining a prestigious line up. Speaking on the announcement they said: “We’re absolutely buzzing to be a part of this festival. Playing with bands like Shed Seven, Happy Monday’s and Cast that we all grew up listening to really is a dream come true for us. We can’t wait to bring our sound to Shiiine On”.

Taking place at Birmingham’s Genting Arena, the incredible line-up includes more than thirty artistes on a never seen before of its kind one day event. Tickets are on sale now via www.shiiineon.com