There is never any shortage of hot jazz at the Birmingham, Solihull and Sandwell Jazz Festival, but singer Irene Serra, featuring with the London band La Bouche Manouche, found the temperature rising alarmingly after her early evening gig at Solihull’s Mell Square on Saturday 21st July.

Irene, travelling with her daughter separately from the rest of the band, had been experiencing problems with the car overheating even on the journey to Solihull, but had 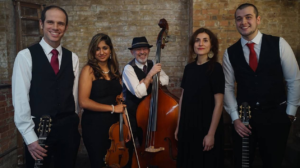 put it down to the hot weather. However, on the M6 on the return leg, her car suddenly went up in flames. Irene pulled over onto the hard shoulder and immediately put as much distance as possible between her and her daughter and the blazing car.

Despite the destruction of the car and its contents, Irene was at pains to point out – while filling in her insurance form – that so many motorists had acted considerately and bravely by stopping and checking that nobody was still trapped in the burning vehicle.

In fact two days after the ordeal Irene was remarkably positive, emphasising what a good and enjoyable gig it had been and looking forward to La Bouche Manouche’s return to the festival the following weekend. Irene and the band are part of an afternoon of Jazz and Film at the Custard Factory and Mockingbird Cinema in Digbeth.

On the afternoons of July 28th and 29th live music and jazz-related films alternate in a free admission ten-hour programme. La Bouche Manouche shares the Saturday billing with Woody Allen’s Sweet and Lowdown, La La Land and The Blues Brothers.