One of the most highly-regarded guitarists in rock music will be performing at the Robin 2 in the autumn. 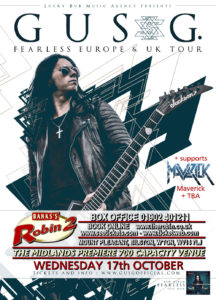 dexterity. In addition, Gus has been a known quantity on the melodic power metal scene as the founder and figurehead of his own group Firewind for some twenty years and can look back on eight studio albums and numerous tours so far. The third pillar of his exceptionally fruitful career is his work as a solo artist, having released his two much acclaimed albums I Am The Fire (2014) and Brand New Revolution (2015).

Gus is now set to continue this successful series with Fearless. At the same time, Fearless also marks the beginning of another chapter: his new band is a power trio featuring vocalist/bassist Dennis Ward (Pink Cream 69/Unisonic) and drummer Will Hunt (Evanescence, Black Label Society). The exceptional Greek-born guitarist has recorded twelve new songs with this line-up: nine vocal numbers and three instrumentals.

Gus and his band will be performing at the Bilston venue on Wednesday 17th October. Tickets