The West Midlands Combined Authority will be moving to digital dialogue as it looks to engage with residents for their views on bringing Channel 4 to the region.

People across the West Midlands will be able to use an anonymous interactive online chat to share their views. Created by Novoville, a civic engagement start-up, which won the recent Urban Challenge presented by the WMCA and Public, the chat will be accessible from Thursday, 19th July.

Novoville runs through either Facebook Messenger or a standalone chat window on mobile phones or desktops and aims to give people a quick and easy way to add their voice to government without having to attend a meeting. 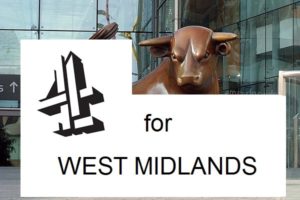 Using the technology, people across the West Midlands will be able to click on a link to join an interactive conversation, which takes around two minutes. They will be able to share their views on the Channel 4 bid, compare their answers to how other users responded, and leave any comments they might have on specific issues.

Novoville’s co-founder, Alex Tupper said: “Working with the West Midlands Combined Authority provides us with the perfect opportunity to showcase the capabilities of our technology.People today expect instant communications at their fingertips and they see no reason why their engagement with politics should be any different. By creating Novoville we provide this access to citizens and allow the WMCA to reach more people than traditional survey methods.”

As winners of the Digital Citizenship Challenge, Novoville secured a prize package worth more than £20,000 and the opportunity to showcase its technology with a three-month pilot with the WMCA.

“Novoville’s citizen engagement tool is useful as by using interactive technology to engage with people across the region, we can both raise awareness and bring a wider range of opinions to the table, giving a voice to many that normally would not be heard. As we look to convince Channel 4 to move to the West Midlands we want everyone to join the #WMGeneration movement.”

C4 is seeking to establish three new creative hubs outside London, as part of its 4 All the UK strategy. The largest of these hubs will become the national headquarters, consisting of offices, a new studio, a base for daily programmes and a new digital production unit. The West Midlands Combined Authority made its formal presentation to the broadcaster on Wednesday 27 June. The final announcement will be in October, with the broadcaster moving to the new HQ in 2019.