Twist is edgy, slick, stylish and cool, Tarantino meets British farce in the rip-roaring comedy thriller that will have you guessing until the shocking end.

Set in the 1990’s in South Kensington, London, Twist tells the tense but hilarious story of David Woods, a mild-mannered accountant who sees a sensational way of making a 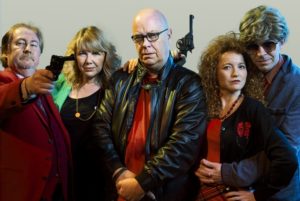 fortune by writing a kiss-and-tell biography about his bitchy wife Sarah, the nation’s favourite actress from the hit soap Doctors and Nurses. He then realises that his book will do even better if she is murdered first. Unfortunately, a few obstacles get in his way…

Twist is written by Miles Tredinnick and Directed by Adam Morley. Baroque Theatre Company is delighted to be collaborating once again with Miles Tredinnick, having toured nationally with his hilarious Up Pompeii in 2014. Miles (also known as Riff Regan, lead singer for band London) is a rock musician as well as a stage and screenwriter. He wrote stage and TV material for Frankie Howerd and was also a writer for Birds of a Feather. His stage plays have been performed worldwide.

This will be the first time Twist has been toured professionally in the UK.

Claire Bibby, Producer, actress and founder of Baroque Theatre Company said: “Baroque Theatre Company tours extensively bringing professional and affordable theatre to venues across the country. This year we are particularly excited to have secured a date at Artrix in Bromsgrove adding to our ever-increasing portfolio.”

Twist is recommended for audiences aged 14+ and tickets cost £13 or £11 for concessions.