Casting agency offers a taste of the big screen.

Uni-versalEXTRAS are heading to Birmingham on the lookout for supporting artistes to join their books for feature film and television work.

The Pinewood Studios-based casting agency are one of the UK’s leading agencies with a proven track record for supplying supporting artistes to film, broadcast and commercial clients. 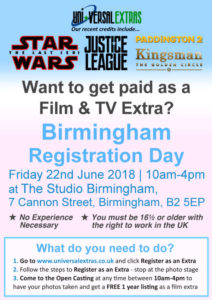 This is a fabulous opportunity for the people of Birmingham to get involved in a number of film and television productions being filmed across the region in the coming months.

The open casting itself is free to attend and any roles obtained are paid work – the only requirement is that any person attending must be over 16½ years of age with the right to work in the UK.

Amy Leyshon, Events Co-ordinator comments: “We work on the biggest and best feature films and have provided supporting artists for numerous projects including Star Wars: The Last Jedi, Justice League, Kingsman: The Golden Circle and Paddington 2. We have some exciting projects coming up in and around the Midlands so are looking for people to come and register to work as a supporting artist with us. We look forward to meeting everyone!”

The casting will take place from 10am–4pm on Friday 22nd June 2018 at The Studio Birmingham, 7 Cannon Street, Birmingham, B2 5EP. If you have any queries contact