Stephen Pennell falls even deeper under the spell of AffieJam.

It all started badly a few weeks ago, when a letter arrived informing me of a hospital appointment on the afternoon of the 15th May. Worse still, when I checked I discovered that I was supposed to be working the late shift and needed to book time off, using up the meagre remains of my annual leave just for the pleasure of being poked and prodded at the QE.

Then AffieJam announced a gig at the Sunflower Lounge for the same date, and things were looking up. Next, I found out that there was a film featuring Mike Skinnerand leading light of Brumtown Grime, Jaykae, premiering at the Everyman cinema in the Mailbox. When the Villa qualified for the promotion play-offs and the crucial home leg was scheduled for the same night, it seemed like Birmingham was to be the centre of the universe on this particular Tuesday. I was suddenly spoiled for choice.

Villa solved one issue by selling out of tickets before I could do anything about it, and truth be told, the Birmingham Grime documentary at the Mailbox, good as it promised to be, couldn’t match the magnetic spell that an AffieJam gig casts over me. 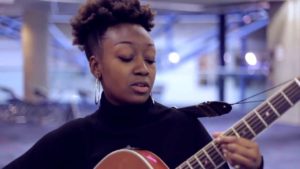 So with my medical ordeal over with, I was in good spirits as I settled down outside the Sunny with a packet of fags and a pint of Rekorderlig cider (£4.70 a pint but well worth it). I usually press gang a few friends and/or family into attending gigs with me, but although her bank manager won’t thank me for it, I don’t drag anyone along to AffieJam performances, for the simple reason that I can’t stand anyone talking to me when she’s on.

So, feeling a bit lonely, I get chatting to a couple of blokes sharing my table outside – one of whom runs the IndieMidlands website, the other a fellow reviewer – and after convincing them that Peace are the best band in the world at the moment – FACT – I go on to wax even more lyrical about tonight’s act. “She does everything – she’s a singer, songwriter, multi-instrumentalist, hairdresser, writes wonderful prose and enlightening serious articles, blogs, illustrates, crafts… you name it, she does it”.

My glowing testimonial is interrupted rather abruptly as the singer herself comes outside to say a quick hello minutes before going on stage, and my two new acquaintances are stunned into silence. As she goes back in to the venue, started up over a decade ago by legendary Snobs DJ Paul Cook, one of them says: “Wow, you didn’t mention she was beautiful as well!” Oh well, if it gets their attention…

Affie opens with her well-established and popular cover of Nirvana’s Smells Like Teen Spirit, which I have grown to love despite not being a huge fan of the original. Something about the melancholic way she performs it, her luxurious velvet voice accompanied only by her own plaintive electric guitar, seems more appropriate for the song’s subject matter than the Seattle band’s raucous delivery.

She follows this up with Are You Not Satisfied?, a new song about the fragility of the artist, a reminder that although we may put them on a pedestal, they are as human as the rest of us, sharing the same stresses and strains. It also touches on the strange relationship between star and audience and the way we consume art. Personally, I blame the internet – nobody wants to pay for anything anymore! Next number is Control, and the opening line – “Got me hanging on your every word” – could just as easily be the enrapt audience emoting to Affie as the other way round.

A vibrant cover of the Noisettes’ (whatever happened to them?) Don’t Upset The Rhythm features some enthusiastic call-and-response vocals with the crowd, led by Affie’s trusted collaborator Jabez Walsh, who seems to be having a night off and is amongst the ranks of the Affie-cionados (we’re like Justin’s Beliebers, only less hysterical and more discerning.

We are then treated to one of our girl’s most popular tunes, the stunningly beautiful and folky Put Aside. This is the first song of hers I ever heard, a bright light that led me to her distant shore. I never tire of hearing it. Her voice on it is understated yet powerful nonetheless, with added weight from some gorgeous lyrics – “I cannot be bound/cuz in you I have found/my release”.

The next song is a real plea from the heart. “Take Me Away,” she implores with a vocal as clear as a bell, and by this time I’m so emotionally engaged I only just resist the temptation to book a couple of flights on my phone. Just as well then that she closes the show with the Little Dragon cover Twice, for which Jabez joins her on stage to add perfect harmonies.

It was a breathtaking performance, and at times I was close to tears with the sheer beauty of it all. There are very few artists who can tempt me away from Villa Park on a night like tonight, and AffieJam is right at the top of the list. She’d better not have a gig on the day of the final.