The work of American composer, pianist and bandleader Duke Ellington will be placed under the spotlight at a three-day conference taking place in Birmingham City University’s Royal Birmingham Conservatoire this month.

Held between Friday 25th and Sunday 27th May, the 25th International Duke Ellington Study Group Conference will celebrate the life, music and legacy of the pivotal figure – often credited as the artist who brought jazz in to the mainstream around the world. 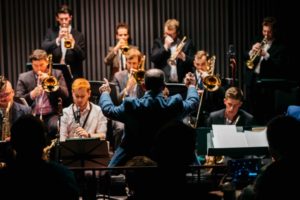 Conference co-organiser, Jeremy Price, Head of Jazz and Artistic Director of Eastside Jazz Club, Royal Birmingham Conservatoire, said: “Duke Ellington in many respects set out the blue print for jazz composition and is still the model band leader to anyone wanting to lead diverse creative talents in their own ensemble.

“This conference will also stand out for integrating abundant live performances, with our Ellington Orchestra doing several shows in our very own Eastside Jazz Club.”

Born Edward Kennedy Ellington in April 1899 in Washington D.C., he was nicknamed ‘Duke’ by a boyhood friend, and the moniker stuck. Self-taught at the piano, his influences were wide and varied – from religion to travel, and Shakespeare to Degas – and, as result, he created works in almost every conceivable medium, including solo songs, orchestral suites, church music and a full-length ballet.

Ellington and his orchestra performed all over the world, including extensively in Europe and entertaining audiences in UK cities such as Birmingham, Coventry and Cambridge.

The conference has been co-organised by the Jazz Studies research cluster at Birmingham City University, which is led by Professors Nicholas Gebhardt and Tony Whyton, and Dr Nicolas Pillai.

Although only five years old, the cluster boasts more than forty members, including ten jazz researchers from across Birmingham School of Media and Royal Birmingham Conservatoire, eight doctoral students and leaders of the regional jazz community, as well as additional academic partners at University of Warwick, University of Amsterdam (Netherlands) and University of Music and the Performing Arts Graz (Austria).

Furthermore, the University’s new £57 million Royal Birmingham Conservatoire is home to Eastside Jazz Club, the first permanent jazz space in any UK conservatoire. In 2017, the Conservatoire launched its big band Ellington Orchestra, who are a regular fixture in the club.

“We are very lucky in Birmingham not only to have the hugely respected Jazz Department within the Conservatoire, led by Jeremy Price, but also a world-leading team of jazz researchers based in Birmingham School of Media. Events like this allow us to create exciting new connections between practice and research.

“I am looking forward to panels which will give us new insights into not just Ellington the man, but also models of collaborative creativity within his orchestra which have larger socio-cultural implications for us today. Ellington’s music was ultimately about connection and this conference will create a space for international scholars from various disciplines to discuss not just the historical but also the relevance of Ellington in the 21st century.”

Tickets for the conference, as well as a full programme, are available online