John Dalton was the bass player with the Kinks, first of all in 1966, then during what many regard as their golden period from 1969-1976. He’s appearing with the Kast Off Kinks, a band made up of former members of the various Kinks line-ups, at the Hare & Hounds in Kings Heath, on 20th May. As he explained, it will be a sort-of homecoming.

“My family came from Balsall Heath. From when I was very young used to visit my dad’s brother in Wenman Street and their parents lived in Hope Street.”

That was a bit before the first Birmingham bands so you didn’t get the chance to hear much music but you did create a bit of a landmark when your first gig with the Kinks was at the Plaza in Kings Heath, in 1966. What do you remember about that night?

“What I remember about that gig was being very nervous because before I was asked to play with the band, if I’d seen a picture of them I wouldn’t even have known which one was Ray Davies. Then suddenly I auditioned for the band on the Thursday, did Top of the Pops that night and they told me that on the Saturday we had a couple of gigs, starting in Birmingham. I had a day to learn the songs, I was a bit shy anyway and I was thinking to myself that my family might be there and things like that. But it went okay, I think.” 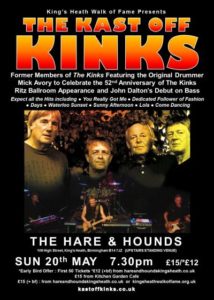 You joined the the Kinks permanently in 1969, which was around the time of their great creative period.

“It was definitely a good time. That first bit in 1966, the crowd was still trying to rip your clothes off and mob the car, then when I went back in 1969 it had got more musical. We had a brass section and we brought in a pianist to play live.”

When you write a song like Lola or the first time you hear it, do you get the feeling that this is the Big One, and it’ll still be around decades later?

“You’re always hoping for that. At the time that when Lola was a massive hit people were saying they thought we’d packed up because we weren’t on Top of the Pops. Back then music on TV was very much singles-orientated and we’d not been having the hits so they weren’t seeing us. It’s like an actor – you can be working on the stage every week of the year but the public think you’ve retired if you’re not on TV for five minutes.”

But while the albums were great – releases such as Arthur for example, were pushing back the boundaries – the sales weren’t too great.

“Arthur was a good album, then we did the two Preservation albums. The Kast Off Kinks now, we’ve played hundred of songs over the years we’ve been together and at the Kinks conventions we do so many old album tracks but we’ve never played anything off Preservation Act One or Two. We lost our way a bit on that.”

You’ve said that you left the band because you weren’t earning enough. Was that because of the album sales?

“This was at the end, right? It wasn’t really making that much money, and half of the reason was that I had three boys growing up. We spent a lot of time in America, we did crack it in the end but in saying that I’d rather play local clubs than a stadium. I like to interact with the crowd and when you’re in a stadium you can’t see anyone. In the clubs it’s more intimate, you’re with the fans.”

The Kinks seemed to fizzle out some time in the mid-nineties, which was a sad ending to such a great band. The record sales were getting less and the tours were getting smaller. In hindsight maybe they should have called it a day after you, or particularly Mick Avory, left.

“They were really good, and then it didn’t work for them. It went from the Kinks to Ray and Dave’s backing band. It all depended on what Ray wanted to do at the time, for instance we didn’t work enough in America, when we first went out there in 1969 we were always bumping into Fleetwood Mac and they were never going home. They were staying there and playing every college and places like that, there’s millions of them and at every one of them sold a couple of records until eventually they became the band they were.

“We didn’t seem to do that, but things always seemed to go wrong. We were due to play with the Who and that would have been great. I think we managed one gig then Dave punched a glass exit sign, he and I had to come home for repairs and by the time we got back the tour had finished. We were always up against things like that.” 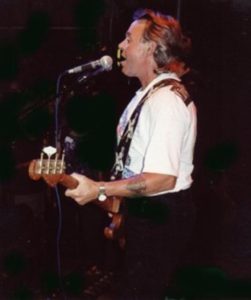 Many years later you helped form the Kast Off Kinks before retiring in 2008, albeit, as it turned out, temporarily. Was there any particular reason for that?

“I look back now and to be honest I had three things going on. I had a real job, I was playing with the Kast Off Kinks and I also had a local rock’n’roll band. Something came into my head and a normal person would have stopped one of them but I stopped all three things and found myself with nothing to do. Jim Rodford took my place but he started doing more and more gigs with the Zombies, so the band would ask me to stand in for him and as the Zombies got more work I was back more often.

“By that time we’d gone from being a few mates playing for laughs to a proper outfit. They were having to take bookings a year in advance but Jim couldn’t commit to that because the Zombies were doing more work, especially in America. Then of course, Jim sadly died in January.

“And I’m still doing it, still travelling up and down the country because I love it.”

Still performing 52 years later on the back of that Plaza gig. When you play the Hare & Hounds you could get the bus up to Balsall Heath and have a look round.

“There’s not much of it left is there?”

The Kast Off Kinks play the Hare & Hounds, Kings Heath, on 20th May. Tickets