The legendary Roy Jones Jr, once considered by many to be the greatest pound-for-pound fighter ever, is heading to Birmingham on Thursday 24th May 2018 at The Hagley (IBIS) exclusively with ShowFighter and Goldstar Promotions. 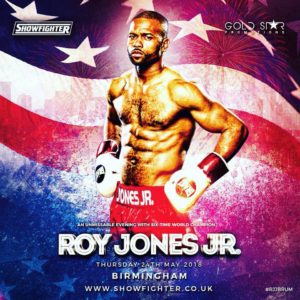 Jones Jr – who won world titles at middleweight, super middleweight, light heavyweight and heavyweight – was named Fighter of the Decade for the 1990s by the Boxing Writers Association of America ande will be making his Birmingham debut for one night only at the VIP event.

The former champion of the world will share his life stories, his achievements, his passions and career after professional boxing – live and unscripted on stage with celebrity interviewer and boxing journalist Gareth A Davis. Roy Jones Jr will be answering questions from the audience and our evening will feature a mix of luxury entertainment, a red carpet drinks reception, an exclusive memorabilia auction and a world-class three-course meal.

Tickets are priced from £59, rising to £99 for a Silver ticket and £199 for a Gold ticket which includes a meet-and-greet photo, a signed glove and a prime table location for the evening.

Andy Sahota, director of Wolverhampton-based ShowFighter UK, said “It’s a great pleasure to host an event with one the greatest ever boxing champions of the modern era. We’re looking forward to welcoming Roy Jones Jr to Birmingham and introduce him to some really passionate boxing fans. It’s going to be an amazing evening for sure!”

An Evening with Roy Jones Jr is sponsored by Medusa Lodge and there are still sponsorship opportunities available. Contact the ShowFighter team for more information. Tickets are being sold here