‘Flawed genius’ best describes the actor whose story has recently been published.

Nicol Williamson is the sort of actor you’ve vaguely heard of, then you look at his CV and you realise that he was one of the major unsung talents of British stage and screen. He was best known as Merlin in the 1981 film Excalibur, nominated for three BAFTAs and two Tony Awards and in one of his last major appearances played the title role in the TV mini-serial Lord Mountbatten: The Last Viceroy. 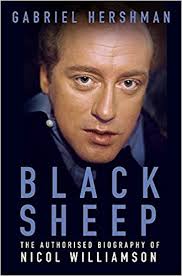 Williamson was acclaimed by his peers as one of the best British actors of his time – John Osborne called him “the finest since Brando” while Samuel Beckett said that he had been “touched by genius”. So why is he largely forgotten while contemporaries are still held in such high esteem? Author Gabriel Hershman helps to explain the mystery.

Or rather, there’s no real mystery because Nicol Williamson was not the easiest of men to get on with. This book tells the story of how he was undoubtedly in the front row when talent was handed out, but barely in the audience when it came to diplomacy and good manners. Others of his generation were noted hellraisers but while they are remembered largely with affection, Williamson is ignored. It seems that he was just too difficult a character, too unstable a personality, and he didn’t care who he upset.

In particular, and fatal in this most insular of professions, he didn’t seem to like his fellow actors – his acclaimed performance in Excalibur was helped, or hindered if you prefer, by his unconcealed and mutual loathing of co-star Helen Mirren. The author calls on a variety of sources to bring this trait out.

The book begin with a story of Williamson snubbing Mick Jagger and Jerry Hall while out dining with his son, Luke, and goes on in much the same vein. He walked offstage during performances, argued and fought with fellow cast members and once struck a film technician who had allegedly laughed at his appearance. At the height of his fame Williamson turned down roles that would have sealed his place in the pantheon of British film greats, with the result that he spent much of his later career exiled in the Netherlands or on Rhodes, waiting for that one final, great role which sadly never arrived.

Williamson spent much of his early life in Birmingham, attending the Central Grammar School for Boys and beginning his early acting carer with the Rep. He did, by all accounts, maintain a Midlands accent throughout his life, so we should perhaps be acclaiming him as one of our own. Read Black Sheep and you might understand why we should.