Jim Tucker explains about a petition calling for a park in Birmingham City Centre.

It’s nearly three years since the campaign started for the provision of a park on the soon to be vacated Wholesale Markets site next to the Bullring in Birmingham’s city centre. We recently passed the 6 ,000 signature mark and thanks to the magnificent expression of public support with the initial petition, some green space in the form of a small linear park is now part of the council’s official plans for the 14 hectare Smithfield site. 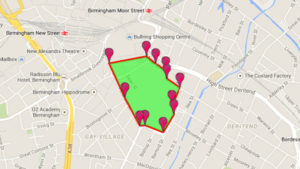 Whilst this is good news, and represents a major step forward, the space allocated for the actual park is simply too small (smaller even than the green space surrounding St. Philip’s Cathedral), is wedged in between several buildings and does not fit our grand vision for one large area of public open space that would be truly transformative for Birmingham.

Central Birmingham already has enough air-conditioned shopping centres, but the lack of a large park in its centre is a glaring omission for a city with an international profile. Now the city should be leading the way to create a large area of green, biodiverse and open space. Our ideas would result in a modern park that accommodates markets and new cultural buildings within it, with links to new housing and transport hubs.

Parks such as the one we are proposing provide the lungs and fresh air for a city and are good for both the private and public purse. In particular, they improve our physical and mental health, promote social cohesion, reduce pollution and provide a site for open-air events.

The election of Andy Street as the inaugural West Midlands Metro Mayor last spring provides a new opportunity to gain more high-profile support for the campaign. So soon we will be presenting both Birmingham City Council and Mr. Street with our updated petition. The more names that we can add to it the stronger the case will be.

To this end we are now asking Birmingham Press readers who have not already signed the petition to do so, and further request that you forward it on as soon as you can to at least two of your friends and family for them to sign as well. It only takes a minute to do something that could help change our city for the better for generations to come!

So please join the campaign to turn a brownfield site into a green one by signing this petition and following CityPark4Brum updates on Twitter, FaceBook and Instagram.