More than fifty events were hosted by Midlands UK, including panel discussions and showcase presentations, featuring almost 100 speakers. Visitors to the Pavilion included potential investors, property agents, developers and the media from more than 100 countries. The Midlands UK delegation comprised 350 people from both the public and private sectors.

This year’s theme of urbanity at MIPIM featured throughout the Midlands UK event programme as it explored topics surrounding sustainability, new housing potential and connectivity. 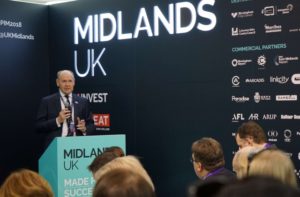 “The Midlands UK delegation has engaged with more investors at MIPIM than ever before. Building on the success of last year we have delivered an outstanding programme of panel discussions, investment showcases, meetings and networking events. The vibrant atmosphere at the Midlands UK Pavilion is testament to the exciting opportunities we have been able to promote this year.”

Regional leaders unveiled major developments to prospective investors. Popular events included an update on the landmark Midlands Engine Investment Portfolio on Tuesday. A panel discussion featured Sir John Peace, Chair of the Midland Engine and was hosted by Director of Export and Investment at the Midlands Engine, Simon Hall. The refreshed Investment Portfolio highlighted 26 of the region’s most exciting investment-ready projects, worth a combined £11 billion. New sites in the Portfolio include MIRA Technology Park’s Southern Manufacturing Sector in Warwickshire, Birmingham International Station and Stafford Gateway North.

Other key announcements at MIPIM include Birmingham City Council unveiling IM Properties as its preferred Development Partner to bring forward the first phase of Peddimore, and the acquisition of Innovation Birmingham by Bruntwood. The city also held a reception to celebrate hosting the Commonwealth Games in 2022.

Councillor Ian Ward, Leader of Birmingham City Council, said: “Birmingham had an incredibly busy and productive week at MIPIM. By working in partnership with other destinations and the private sector as part of the Midlands UK delegation, we were part of a strong, cohesive voice promoting the city and region’s investment opportunities and ambitions for growth to a global audience.

“Showcasing developments on the scale of Peddimore and Curzon, and announcing news such as the acquisition of Innovation Birmingham, has made a really positive impression on the investors and developers that can help deliver our growth ambitions for the city. Birmingham’s reception celebrating our plans for the Commonwealth Games was very successful and has demonstrated to delegates at MIPIM that the city is not only a global destination for business and investment but also a home for major international sporting events.”

Mayor of the West Midlands, Andy Street, added: “There was a real feeling at MIPIM that our region is on the up. It also saw the West Midlands working together in showing the world how we are the UK’s new growth capital and its most liveable, investable and competitive region.

“The launch of our £10 billion Investment Prospectus was significant and proved effective in demonstrating to potential investors and developers the sheer breadth of opportunities on offer. But it also underlined our determination to make sure that this growth benefits everyone and that the investment set out in the Prospectus tackles the things that really matter to people like good homes, jobs and access to skills and learning.”

The private sector has been out in force at MIPIM. The size of the Midlands UK delegation increased significantly in the run up to MIPIM, with 68 commercial partners – including the region’s property community, major businesses, airports, science and tech parks, and local universities – working with 12 public sector partners to promote the region. This includes the Department for International Trade, a key funder and supporter of Midlands UK.

Rob Eaton, Head of Planning, Transport & Strategy, Birmingham Airport, said: “This year’s MIPIM event has been phenomenal and Birmingham Airport was proud to be able to support Midlands UK to showcase the unrivalled opportunities available to investors from across the world.

“Having support from the Mayor and leaders of councils from across the Midlands demonstrated a united front and all involved spoke with one voice which will no doubt send a strong message to those looking to invest in the region that this is the place to live, play and work.”