Members of the public will have the chance to buy many unique pieces of theatrical history as the Birmingham Repertory Theatre hosts a special one-off costume sale on Saturday 7th April.

Iconic costumes up for auction include: Dorothy’s gingham dress from the theatre’s 2005 production of The Wizard of Oz, Cruella de Vil’s fake fur coat from The Hundred and One Dalmations, Lady Bracknell’s frock from the 2011 production of The Importance of Being Earnest, as well as a beautifully detailed 17th Century-style gown and a selection of colourful courtiers costumes.

As well as hundreds of costumes, also available to buy will be shoes, hats, accessories and a selection of unusual speciality props, including some very special items being auctioned off. 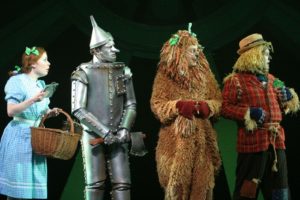 The REP has created thousands of costumes over the years, from medieval to modern day, as well as hundreds of interesting props from practical furniture to miniature houses for the theatre’s many and varied shows. Costumes made by the theatre’s highly skilled wardrobe department, will be on sale on the day, as will some small, special props from The REP’s recent Christmas show, The Hundred and One Dalmatians.

All money raised from the sale will go towards the theatre’s REP First fundraising campaign, which aims to raise £1 million towards staging new productions, offering more training opportunities and welcoming more participants and audiences than ever before.

Tomas Wright, Head of Production said: “Our wardrobe department and prop makers are extremely talented – the wonderful costumes and vast number of items they make are a vital part of our productions. Many items we keep in store for future use, however, there’s only so much we can keep and by having a big sale it gives us a great opportunity to have a spring clear out as well as raise money to invest in the theatre’s future.”

Rachel Cranny, Head of Fundraising said: “Our costume and props sale will definitely appeal to amateur dramatic societies, costume hire companies, schools and collectors of theatrical paraphernalia. I’d urge anyone who’s interested in theatre or those who would just like a fabulous fancy dress costume to come along and have a rummage. By doing so they’ll be supporting The REP.”