Local talent will be amongst artists on display.

An exhibition showcasing some of the most important contemporary artists of today will begin at a Birmingham gallery this week. 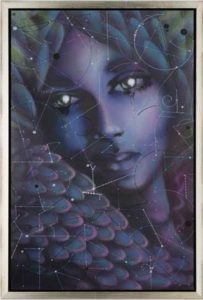 Temper is widely recognised as one of the most successful and talented graffiti artists of his generation. He was the first ever graffiti artist to be awarded a solo show in a major public gallery when he exhibited at Birmingham Museum & Art Gallery in 2001.

Temper’s latest collection, Out of Darkness, features intricately painted constellations and geometric shapes which allude to the Golden Ratio found in art, mathematics and nature. Inspired by the work of Dali and Leonardo da Vinci, each new piece reveals an androgynous, Roman-esque figure that represents “the duality and balance of life”.

Plume comprises graphic designer Ernest Otoo and photographer Andy Pilsbury, and was originally set up in Ernest’s flat near Broad Street as an escape from the pair’s self-described “mundane work routine”. They combine juxtaposing skill sets to create their ink-in-water pieces, describing their work as “escapism through exploring”.

All artists exhibiting in Exposition will be present at a meet the artist event to close the exhibition on Saturday 7th April, between 1pm and 3pm, where guests will have the chance to learn about their inspirations and techniques.

Speaking ahead of the exhibition, Temper said: “From the very beginning of my career I’ve had a strong connection with Birmingham, so it’s always a pleasure to exhibit my work in the city. My latest pieces are unlike anything I’ve ever produced before, so it will be interesting to showcase them at the gallery alongside many other talented artists and see the reaction from viewers.”

Beth McCarthy, gallery director at Castle Fine Art, ICC, added: “The transition of original art into limited edition prints has become extremely accomplished, but viewing originals is always a joy, and we wanted to give visitors the opportunity to appreciate original art in its raw glory.

“Our exhibiting artists are truly breaking the mould and this is a unique opportunity to view all of their work together under one roof. The meet the artist event will be a fantastic way to mark the end of the exhibition and for art fans to meet some of the biggest names in contemporary art and hear the stories behind their latest work.”