The British Red Cross is asking people across Birmingham to show their support for the charity by donating unwanted shirts, following new research which reveals that eight in ten people in the city own clothes they know they should get rid of with more than a third of people in Birmingham having owned a piece of clothing for longer than a decade. 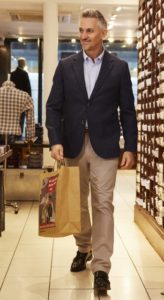 The statistics have been released as TM Lewin launches its Shirt Swap campaign with the British Red Cross, fronted by Gary Lineker, calling on people to donate their unwanted shirts to help support the charity’s vital work, following an unprecedented year of humanitarian disasters in the UK. Shirts will be re-sold in British Red Cross shops, helping raise money to support people in crisis across the UK and around the world.

Research commissioned by the two organisations asked more than 2,000 UK adults about their attitudes towards getting rid of old clothes, and found the majority of us are guilty of holding onto clothes we know we don’t need or wear. The survey found:

• Almost half of people in Birmingham own more than ten items of clothes they don’t wear
• Four in ten adults in Birmingham wish they could get rid of an item in their partner’s wardrobe
• Two in ten people in Birmingham admitted to secretly throwing away their partner’s clothes
• Men hold on to old clothes for longer but women own more clothes they don’t wear
• Some of the most common reasons for holding onto things are because they are comfortable and familiar or have sentimental value.

The findings show how people in Birmingham can get behind the work of the British Red Cross – which responded to more than a thousand emergencies in the UK alone last year – by donating their unwanted shirts to a British Red Cross or TM Lewin shop. Former England striker turned TV presenter Gary Lineker is backing the campaign, and has donated some of his shirts to the appeal.

The Shirt Swap campaign runs from February 19th until March 25th, during which time the public will be able to drop in their shirts to a British Red Cross or TM Lewin shop and receive a TM Lewin voucher in exchange.

Money raised from the campaign will go towards the work of the British Red Cross, including in the UK where staff and volunteers help with establishing rest centres, providing psychosocial support and first aid, and working hand in hand with the emergency services to assist people when tragedy strikes.

Paul Thompson, Director of Retail at British Red Cross, said: “We need clothing donations now more than ever. Last year saw one of the largest responses in the history of the British Red Cross – with hundreds of volunteers and staff mobilising to assist people affected by tragedies across the UK. Red Cross shops are a vital source of funds to continue supporting this work.

“With more than 330 shops in the UK we can turn any donation in kind directly into cash for the organisation. Not only does this raise vital income, it’s also a green alternative, giving your pre-loved items a second lease of life – each charity shop every year diverts an average of 30 tonnes of textiles from landfill. What’s more – our partnership with T.M.Lewin means people have even more places to choose from to donate to us.”

Football presenter Gary Lineker, who is fronting the Shirt Swap campaign, said: “I’m just as bad as anyone at getting rid of my stuff and with so many people owning clothes they no longer wear, this is the perfect opportunity to have a clear out and do some good in the process.

“Rather than chucking your unwanted shirts in the bin – why not head down to a British Red Cross or TM Lewin shop and donate them to help fund the sterling work the charity does across the UK and all over the world?

“It doesn’t matter what kind of shirt it is and it doesn’t have to be from TM Lewin. Big, small, t-shirts, smart, scruffy and football shirts; each of these donations will help communities to recover and rebuild in the wake of an emergency. Even better – you can get some new shirts in exchange.”

Geoff Quinn, the CEO at TM Lewin, commented: “We are proud and delighted to work on this very worthwhile project with the British Red Cross. For us, the campaign provides a platform for us to help our customers do something good, by spring cleaning their wardrobe of unused shirts for sale in British Red Cross stores. We will be doing everything we can to ensure our customers get behind the campaign and donate as many old shirts as possible to this great cause.”

To learn more about the British Red Cross’ partnership with TM Lewin and how to donate your unwanted shirts to the Shirt Swap campaign, visit: www.tmlewin.co.uk/shirtswap