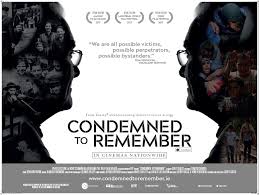 The screening of Condemned to Remember was held to coincide with Holocaust Memorial Day, with Tomi and Emmy award-winning director Gerry Gregg visiting to launch the film and take part in a question and answer session.

Dignitaries, schoolchildren from across the Midlands and members of faith communities saw Tomi, now an Irish citizen, embarking on a journey across Europe, visiting Germany, Poland, his native Slovakia and Bosnia-Herzegovina.

The screening, held in partnership with the charity Remembering Srebrenica, shows Tomi witnessing the rise of the neo-fascist People’s Party in Slovakia and meeting Hasan Hasanović and Dr Fatima Dautbašić-Klempić, survivors of the 1995 Srebrenica massacre. Mr Hasanović and Dr Dautbašić-Klempić also made the journey to Solihull for the screening and to take part in the question and answer session.

The film centred along themes of learning from the past and heeding the warnings being sounded about the rise of right-wing figures and parties in modern-day Europe. Tomi, who was days away from starving to death when the Bergen-Belsen concentration camp was liberated in April 1945, recalled playing among dead bodies with other children. He said he wanted people to understand the parallels between what he experienced and recent global events.

“The film is really to show that history is repeating itself. In the late 1930s, the Jews wanted to escape from Europe and nobody wanted them. Now we have refugees who are being persecuted and raped in Syria and other countries, and nobody wants them either,” he said.

“The message of the film is that education is very important. It’s about learning about racism and xenophobia and learning from the past before something similar happens. The holocaust didn’t start in the gas chambers – it’s at the early stages where we have to make sure it doesn’t go any further.”

Explaining his ambition for the film and what he hoped it would achieve, director Gerry Gregg said: “I had a very modest aim to assert the common bonds of humanity. I wanted to touch the hearts of the audience. Making the film was very humbling but also an experience which reinforces a sense of responsibility, to be mindful of the traumas and horrors they went through and not exploit them for cheap, sensationalist reasons.

“I was very aware of the scale of the canvas I was working with. It’s difficult because you can get lost in it. I was very fortunate that I had a character like Tomi to work with; someone who can look at current events and see echoes of the past. He is an extraordinary man.”

Hasan Hasanović survived the Srebrenica massacre by joining thousands of other refugees in a march towards safe territory, with little food or water in the height of summer. He said: “Once I saw the film, I said to Gerry it was one of the best documentaries on the Holocaust ever made. It tackles all of the issues we are facing today.

“When I go back to my old village where I grew up, there is nothing there. I can only imagine what is there – the beautiful life I had has disappeared. In the film, you see the right-wing movement growing across Europe. It is as if Europe has not learned anything, so we have to send this message of education.”

Fellow survivor, Dr Fatima Dautbašić-Klempić, added: “Showing the film to school children is important to teach them not to hate. You have a nice life, a nice school and you don’t need to hate anybody.”

Mark Penney, Head of Solihull Junior School, who has worked with Gerry and Tomi on previous film screenings at Solihull, said: “It was a real privilege to host this premiere and to welcome three of the remarkable subjects of the film to Solihull. The positive reaction and feedback to the event has been enormous and continues to pour in.

“What impressed our visitors the most was how welcome they were made to feel by the audience, and how people came from all over the country and abroad to be here to watch their film and to listen to them speak. The diversity of the audience was something they had not experienced before and they are enormously grateful to have had the opportunity to speak to so many representatives of so many communities.”

The screening was part of the leading independent school’s ongoing commitment to remembering the victims of the Holocaust.

Solihull School has strong links with the Holocaust Educational Trust, for whom former pupil and current gap year tutor Megan Lloyd is an ambassador. Two years ago, a sapling taken from the tree Anne Frank could see from her hiding place in Amsterdam was planted at Solihull School on Remembrance Day by Mindu Hornick, a survivor from Auschwitz.

The school has also forged strong links with Remembering Srebrenica. Two of members of school staff and three Sixth Form students will join the charity’s Future Leaders in School Programme in Bosnia in February.

The film is not on general release in the UK, but will feature at a series of public showings throughout the year.