Connie Lush is one of the great British voices, with so many awards and acclaimed albums it’s hard to keep track. She’s about to headline a tour with two up and coming new stars of the blues scene and Dave Woodhall spoke to her.

“Recovering from the festivities and general debauchery. I’m off to see some friends in Madrid soon then it’s down to work again. I’m playing the Skegness festival in a couple of weeks with Dr Feelgood and some others. That’s a really madcap, crazy weekend. It’ll be icy freezing but it’s a great time. It always sells out and everybody’s really up for it. Then it’s back into playing. It just keeps going.”

You had a chance some years ago to work in Memphis. When you’re playing Skegness in January, you must sometimes wish you’d gone for it.

“No, because I was offered a deal while I was there about fifteen years ago and I just didn’t want to do the American way of things. I’ve played there but it wasn’t for me. I love playing in Europe, I’m a UK girl. I know Memphis has changed a lot since, there’s been a load of money spent there apparently and it’s a lot different from when we were there and there were very few white people around. At that time it hadn’t changed much as all over the years but now the local people in the South aren’t bothered about the blues at all. They’ve always had a deluge of it when we couldn’t get the music as at all, so they’ve been saturated with it.”

Which has changed again because in the last few years the blues has taken off again in the UK. One of the good things about the new blues scene here now is the number of young acts, particularly female ones. They must look at you as a bit of a godmother of the blues to them because you’d been doing it for years when they first started out.

“I’ve done all that over the years and we all get on but we don’t need to to support each other now. It’s not just a bloke’s world anymore but I must say I’d rather work with a band full of blokes. It’s a lot less less complicated.”

Although it must be easier for a woman to tour than when you started out.

“My husband Terry is in the band so I’ve always had that support, but to be honest I always got more gip about being from Liverpool – watch your wallets, watch your hubcaps, all that sort of really original stuff…”

Or expect you to say that your mother went to school with Cilla Black and your dad was best mates with George Harrison.

“Stuff like that as well. I was a bit too young to be a part of it all but I do like the songs and you have to respect them. They still bring a fortune into the city. That film Eight Days A Week that came out lately, the one about their first few years is a real eye-opener. It explains not just about the Beatles but the whole Merseyside explosion.”

And it shows how the Beatles re-invented rock’n’roll. All the great rock’n’roll songs had been written in a few years from about 1955 yet blues standards have been coming out for a century and more.

“God, yes. It’s amazing what you can find when you start looking into it. A lot of the women that were singing at the start, that’s why I originally called the band Blues Shouter because that’s what they were called. They were just so smart and powerful, a lot more bawdy and in your face. That softer style came a lot later.”

Now you’re about to start touring with two other women, Kyla Brox and Erja Lyytinen. 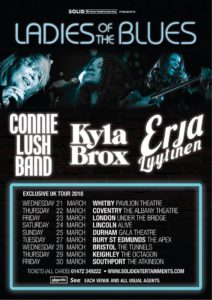 “I really love playing live. I’m not a studio person, but getting up there and playing to an audience, you do an hour of your favourite stuff, talking about it and the people who sang it, I just love that.”

I noticed that your latest work is credited to the Connie Lush Band rather than the familiar Blue Shouter. Is that because there’s been a change of emphasis in your music?

“There’s some new guys in the band so we talked about it and because everyone’s used the name Blues Shouter for years I think it’s just laziness so I thought to just put Connie Lush Band. But everybody puts up what they want anyway, I still have gigs that say Blues Shouter. It’s just one of those things.”

It’s hard across the board for musicians to get gigs now but blues acts seem to have it harder than most because there have always been a lot of festivals and they’re feeling the pinch of funding cutbacks. Colne, for example ,which is probably the best-known in the country has been scaled back for the past couple of years while the Birmingham jazz festival under its various names always had a lot of blues but it’s now a shadow of what it was.

“New people are now running Colne and they’ve changed some of the venues as well. It’s wait and see there but yes, everywhere there are cutbacks. We’re lucky in Liverpool because the music brings so much tourism in that there has to be investment but when you look at some of the big cities there is a problem there. Then there’s the smaller venues, a lot of them are either going to the wall or having to put other stuff on to finance the blues bands and the less commercial shows. That’s the way it’s going to be. Blues bands are still playing but I feel for the newer artists.”

Which is why the audiences have to keep turning up and you have to carry on entertaining us.

“That’s the only way we can do it. It’s a great life but we just have to get on and do it.”

Ladies of the Blues play the Albany Theatre, Coventry on Thursday 22nd March 2018.