The true cost to Sandwell residents of hosting the 2022 Commonwealth Games aquatics events became clearer on Tuesday with the announcement that community swimming pools at Thimblemill Road, Smethwick and in Langley would be closed to make way for a new £60 million swimming centre, to be constructed on the Borough’s Londonderry Playing Fields.

The new centre will feature a 50 metre pool, 25 metre diving pool, 125-station fitness gym, 12-court sports hall, seats for 5,000 spectators. Details of how the facility will be funded, and by whom, remain unclear, as do issues such as its ongoing running costs and long-term financial viability in what might be described as a somewhat ‘off’ location. 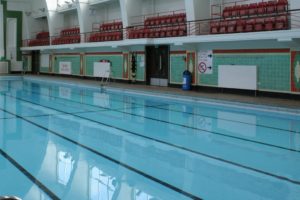 Sandwell Council reported that whilst the facility at Langley would likely be demolished, a new (though as yet unspecified) public use will be found for the Thimblemill Lane building. The Council also started that the lost playing fields at Londonderry would be replaced by “adequate alternative spaces”, but were unable to explain what this somewhat vague and ambiguous phrase meant in real terms.

The Grade II listed Thimblemill Road Baths were designed by Chester Button and Smethwick Borough Engineer Roland Fletcher and opened almost 85 years ago on March 30th 1933. The building underwent a major restoration around a decade ago and is amongst only three swimming baths in Britain built in the Moderne style (the others are located in Northampton and Aberdeen).

A much-loved and well-used community resource, in November 19th 1962, when the swimming pool was still boarded over during the winter season for dances and other social events, the venue hosted a performance by the then largely unknown Beatles (with both the Kinks and the Who following in later years).

The pool and sports centre in Vicarage Road, Langley, whilst of considerably less architectural merit, nonetheless remains a vital amenity whose loss will be keenly felt by many in the community. As swimmers in other many locations beyond the West Midlands will testify, replacing a small community pool with a 50 metre leviathan rarely results in a satisfactory outcome for the wide range of swimmers and swimming needs previously catered for.

Tuesday’s announcement is the first occasion that threats to the future of either the Smethwick or Langley facilities has been publicly discussed and calls into question the Birmingham Games bid team’s claim that hosting the Games would improve the region’s sporting infrastructure. Since reports first emerged that the 2022 aquatics events would likely be staged in Sandwell, councillors and council officials have been keen to portray the prospect as uniformity positive news for the borough, with no mention of any possible downside.

Requests both to Sandwell Council and Birmingham Games bid organisers last year for information about the new centre were met with the same intense secrecy that has characterised many crucial elements of the Games bid.

Given the short (four and a half year) lead in time to the Games, Sandwell’s announcement of a public consultation with residents and businesses on the plans, following their approval by Sandwell Council Cabinet next week, seems little more than cosmetic, and it is hard to imagine local councillors risking any delay to the project, meaning that once again effective public scrutiny and accountability of the 2022 Games is likely to be minimal.

One thought on “Commonwealth Games 2022 – Something they forgot to mention”