One night only chance to meet former world heavyweight champion.

Tyson Fury is making his debut appearance for an audience with fans in Wolverhampton on 13th December for Turkey & Tinsel with Tyson, ShowFighter and GoldStar Promotions have announced. 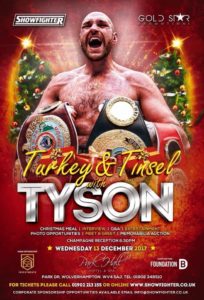 The self-proclaimed Gypsy King, who has not fought since that famous night in Dusseldorf when he dethroned Wladimir Klitschko almost two years ago, reiterated his desire to step back into the ring to reclaim the belts he relinquished following problems with depression and drugs last month.

Tyson felt he didn’t get the recognition or support from authorities or the media for his achievements, due to his traveller background which led to him falling out of love with the sport. Having lost his IBF, WBA and IBO titles outside the ring controversially, Tyson now feels it’s time to come back stronger and win back the belts that should belong to him and for that he now has current world champion Anthony Joshua in his sights amid fantasies of an all-British showdown.

The former unified heavyweight champion of the world will share his personal story – live and unscripted on stage, with celebrity interviewer Gareth A Davis. Tyson Fury will be answering questions from the audience and the festive evening will feature a mix of top entertainment, red carpet drinks reception, stunning memorabilia auction and a delicious Christmas meal.

Tickets are priced from £55, rising to £85 for a Silver ticket and £150 for a Gold ticket which includes a picture with the man himself. Guests wanting the full VIP experience priced at £200 can not only get a photo, but will enjoy a VIP meet and greet with Tyson Fury, prime table location and a signed glove.

Andy Sahota, director of Wolverhampton based Showfighter UK said “I’m thrilled to be hosting Tyson Fury’s debut in our home city of Wolverhampton. He is such and talented yet controversial boxer and this event promises to be a fun and festive evening for all.”

Fundraising on the evening will be in aid of the local Foundation DB set up by Wolves captain Danny Batth, which helps reduce homelessness in Wolverhampton. The evening is sponsored by SB investments and Social Butterfly Events with further sponsorship opportunities available for companies wishing to support the event, contact Showfighter for more information.

Spencer Brown from Goldstar Promotions said “I’ve hosted events with Tyson for many years and as we all know he is very outspoken and doesn’t hold back. Wolverhampton won’t be disappointed!”

Meet the Gypsy King in person, enjoy a fabulous night of festive entertainment and enjoy the surroundings of a top venue on 13th December 2017 at The Ramada Park Hall Wolverhampton. Tickets are available at www.tysonfury.eventbrite.co.uk