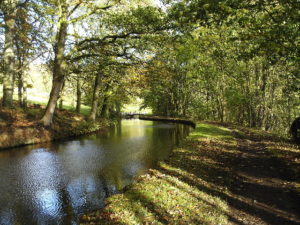 Richard Lutz trawls through the wreckage of another week.

Autumn hasn’t held its breath this long for a while. Leaves are still on the trees, breezes are still warm, there’s even a burst of apples on the branches.

I use Warwickshire to stretch my legs. Or rather, my right knee. It had the temerity to ram a police car two weeks ago; the accident sent me sprawling across a busy road and the joint is still achey as hell. I take a flat walk on a canal – or rather next to it. It meanders through untouched countryside. Kind of like that picture above, in fact.

Sunlight, low and bright, glints off the still waters, reflecting coloured foliage. There ia a ripple of dark green in the hedges that separate fields bathed in sharp light. My legs want to go further. But the knee is enlarging again from tissue damage. And I’m told it will take week upon week to heal. 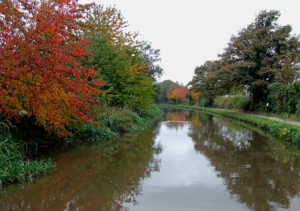 The canal I use is not far from Stratford. Shakespeare, despite dying 401 years ago, is still in the news. There’s a whacko article in the papers which reports how Evelyn Waugh’s grandson (who?) is to reveal a secret code found in London which proves the playwright was buried not in his native Stratford, as believed, but beneath a forgotten monument in Westminster Abbey.

The explanation of the secret writing is so arcane, so un-understandable, that I won’t belabour you with it. The general feeling of this jubilant nation is…who cares? My feeling is that Mr Waugh, being a Metro type from within the M25 belt, cannot stand the idea of Britain’s most famous son being interred somewhere in bloody backwater Warwickshire. A nation awaits with unrelenting ennui over full disclosure. Which is imminent and totally unnecessary.

If not in the news, then The Swan of Avon rears his balding head in fiction. I start a new book by Bernard Cornwell. He is known for historical novels – the Dark Ages, the Medieval era, the War of the Roses, that kind of thing. Now he has taken on the Tudors and, guess what, he bases his novel, called Fools and Mortals, on Shakespeare’s little-known younger brother Richard. The only fact is L’il Dickie did really exist according to original documents; he was a minor actor in Will’s plays. And he is buried in London – unlike, I must underline, his brother. Despite what Mr Waugh proclaims.

Marching briskly but wobbly on from bad knees and Shakespeare, I watch a pair of Fred Astaire films, maybe the last to be delivered from the shortly-to-be-shutdown dvd rental company Lovefilm.

Both have laughable plots and plodding dialogue. But some notable hoofing and movie footnotes are embedded.

In the first, called Royal Wedding, old Fred dances in a revolving room (see above) so he ends up soft-shoeing on the ceiling and walls. Well, how was that done? Astaire’s love interest is Sarah Churchill, Winston’s theatrical daughter. She’s out of the Katherine Hepburn school of acting, just passable as a dancer and reasonably passable in a starchy English role.

The second half of the double bill is a movie that Astaire himself called the worst he ever made- Second Chorus. Two actresses were culled before he found a partner in Paulette Goddard who did commendably well partnering with Astaire in this clunker of a film. The best bit- Fred doing a mean tap dance as he conducts an orchestra.

Worst bit- middle aged Fred (balding) and ageless Burgess Meredith both playing college pals who start up a jazz band. They are hired by real-life clarinettist Artie Shaw (Begin the Beguine). He thought the film so awful that he never appeared in Hollywood again.

But, despite the mediocrity of both movies, they were worth the time and unending longeurs of bad dialogue  to see an elegant man wander a sound stage with the steps of an angel.