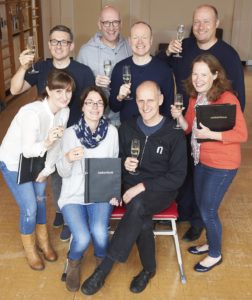 Four couples who met then married through notorious, Birmingham’s choir with a difference, are back in rehearsal for a special anniversary concert to mark twenty years since the choir was formed.

The couples, who all met at rehearsals in the early years of the non-audition choir’s existence, are helping to form notorious’s biggest choir-to-date for its biggest concert-to-date, in Birmingham Town Hall on Saturday 23rd November.

notorious, which is usually 35-strong, is welcoming back members past and present to form a 75-strong choir for the big concert, performing Fauré’s Requiem and Rutter’s Magnificat, with orchestral accompaniment, in an uplifting finale to its twentieth anniversary celebrations.

For the notorious lovebirds, whilst some still sing regularly with notorious, others find it more difficult due to work and family commitments.

Katherine and Stuart Nokes were the first couple to wed in 2002, having met at choir in 1998. notorious sang Finzi’s Thou Art My Joy and Tavener’s The Lamb as part of the wedding ceremony before bursting into song with Let There Be Love as the couple left for their wedding reception. Katherine said: “We’ve two children now and have moved out of Birmingham so can’t make rehearsals regularly anymore, but it’s great to be back for this special event and we’re enjoying singing with friends again.”

Ian and Liz Sutton were the second choir marriage – they met in 2001, wed in 2005 and now have three children. Ian said: “Rutter’s Magnificat has a special place in our hearts as the choir performed the opening movement as part of our wedding ceremony at Our Lady of Lourdes Catholic Church, whilst we were signing the register. It’s great to be performing it again and look forward to raising the roof at Birmingham Town Hall.”

Mike Tickle and Rich Joinson met in 2004, and they got married twice, as Rich explains: “We travelled to Las Vegas to get married in 2005 where we were unofficially wed by an Elvis impersonator and then we then made it official with a civil partnership ceremony in 2006 at Hotel du Vin. What better songs for the choir to perform at the reception than Copacabana and Viva Las Vegas, in a nod to our initial union in Vegas.”

Jon and Rachel Hawkesworth, who are two of only five founder members of the choir left who still sing with notorious today, married in 2007 and have two children. Jon said: “What we really enjoy about notorious is the wide range of repertoire that we cover, and we wanted to reflect this in the music we chose for our wedding. From Hey Trolly Lolly Lo, an early music piece, right through to a special arrangement of Human League’s Together in Electric Dreams, it was certainly memorable!”

Musical Director Clare Edwards, who formed notorious back in 1997, said: “For us, the social side of the choir is just as important as the singing, so those post-rehearsal trips to the bar have become a mainstay throughout our 20-year history, getting people mixing and talking.

“Maybe there’s also something in the recent research from Sweden that found that choir singers not only harmonise their voices but also synchronise their heartbeats. It’s been fantastic seeing love blossom across the rehearsal room. I’ve been proud to lead the choir in a range of music at the four notorious weddings-to-date, and it’s fantastic to have them all back for our special anniversary concert at the Town Hall.”

Notorious was launched in 1997 by Musical Director Clare Edwards, to make high-quality choral music that is accessible and can be enjoyed by anyone, regardless of background or previous experience. From a tentative group of 15 singers in the first concert, the Birmingham-based choir has grown both in size and confidence over 20 years, performing more than 120 concerts in 65 different venues from caves to coffin factories.